Posted April 10, 2019 by smutmatters in Waiting on Wednesday / 0 Comments Workaholic attorney Anita Hunt is on the job 24/7. She’s looking to make partner, not party. While on a forced vacation in Hawaii, she meets gorgeous pilot Steve Blair. When engine trouble forces them to make a crash landing, the seductive airman shows her a side of the exotic island and herself she never expected—and a passion that could make them partners in paradise forever.…

One note on this book – it was initially published in 2012 as part of the Island for Two anthology. This is the first time it’s been released on its own. Not that anyone needs any reason to buy a Beverly Jenkins book. 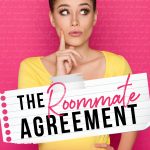 New Release! The Roommate Agreement by Emma Hart is out NOW!