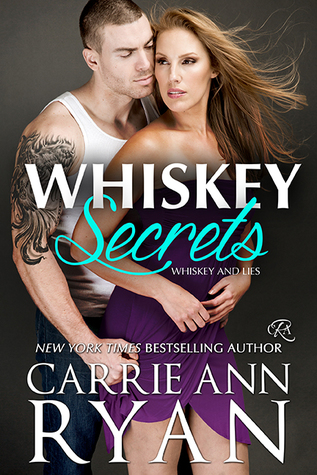 Sparks fly between a former cop-turned-bartender and his new innkeeper in the first installment of a Montgomery Ink spin-off series from NYT Bestselling Author Carrie Ann Ryan.

Dare Collins is a man who knows his whiskey and women—or at least that’s what he tells himself. When his family decides to hire on a new innkeeper for the inn above his bar and restaurant, he’s more than reluctant. Especially when he meets the new hire. But he’ll soon find that he has no choice but to work with this city girl and accept her new ideas and the burning attraction between them.

Kenzie Owens left her old life and an abusive relationship behind her—or so she thought. She figures she’ll be safe in Whiskey, Pennsylvania but after one look at her new boss, Dare Collins, she might still be in danger, or at least her heart. And when her past catches up with her despite her attempts to avoid it, it’s more than her heart on the line. This time, it might mean her life.

A new series by Carrie Ann Ryan is always good news. Whiskey Secrets, the first book in her new Whiskey and Lies series, is no exception.

Dare is my favorite kind of hero –  grumpy, taciturn, not afraid to speak his mind, but genuinely kind and considerate, and IN IT 100%. I really liked Kenzie a lot, but Dare made this book for me. Which came as a bit of a surprise, because upon first meeting him, I wasn’t sure I would like him at all.

Dare Collins is a former cop who now owns The Old Whiskey Restaurant and Bar in Whiskey, Pennsylvania. He’s single (obviously) and determined to stay that way. We know this because in the first 5% of the book, he thinks about how he “doesn’t do relationships” at least 14 times. To the point that I finally highlighted it in my Kindle and added a note that said “FFS. We fucking get it already”. Seriously, authors, can we stop this? Even if a man isn’t actively looking for a relationship at the time, I have a rough time buying that they stand around thinking “I don’t do relationships.” or “Relationships were for dickless suckers who want a woman to control their entire lives” every 37 seconds. The fact that he’s single and not actively looking actually tells us that he’s not interested right now. Plus, it automatically plays into the “Not Like Other Girls” trope that I’m really sick of.

Anyway. Dare’s parents own and run an inn, which is the other half of the building that currently houses Dare’s bar. He’s horrified and pissed off when he finds out that they would like to retire and have hired Kenzie, a complete stranger, to be the new innkeeper and help them manage the renovations they want to do. Truthfully, this scene was why I didn’t think I was going to like Dare very much. He all but stomps his foot and holds his breath when he finds out that his parents have hired Kenzie, or anyone, to run the inn that they own, without consulting him first. He does own the bar that takes the other half of the building, I get it, but for crying out loud. He doesn’t own a single bit of the inn, and he acts like his parents have personally betrayed him by wanting to retire.

But Kenzie. Kenzie takes none of his shit. She has a lot to overcome, but she refuses to let her past control her present or her future. She’s not going to let Dare bully her just because he’s upset with his parents, and she wastes no time making sure he knows that. I loved it. She stands up for herself even when it’s hard because she knows it’s the only way she’s going to get her self-confidence back.

Together, these two were really sweet. Dare doesn’t know any of the details, but he knows that there’s something in Kenzie’s past that she’s still working through. As a result, he takes things slow with her, constantly checking in on her, making sure at every step of the way she’s still ok and doesn’t feel pressured or rushed. It’s really sweet, and it helped me come around on him.

The weakest part of this book was the sub-plot involving Dare’s son Nathan. Dare and Nathan’s mom, Monica, weren’t really in much of a relationship. They were pretty much fuck buddies, who tried to make it work when she got pregnant, but just couldn’t. So far, I’m ok with it. What doesn’t work for me is their current relationship. Monica is hostile toward Dare for absolutely no reason. She only allows him to have one weekend with Nathan per month, and refuses to consider any other arrangement because….. reasons?? I don’t know. Dare wants more time with him, but he won’t even bother seeing a lawyer because there’s no way the courts would grant him even joint custody because he works in a bar. Which…. what? He used to be a cop, which was a dangerous job, and now he works in a bar, so no one will let him see his son. It makes absolutely no sense. He’s not a third shift bartender in a mob bar or biker bar. He owns what basically amounts to an Applebee’s. It makes absolutely no sense that everyone just goes along with “I used to have a dangerous job, now I work in a bar, so I can’t see my son.” It’s ridiculous.

The situation with Kenzie’s ex goes from bad to worse very quickly. He was kind of a dick when they were together, eventually turning abusive, which is when Kenzie finally left him. He shows up, of course, and is completely unhinged. To a level that I don’t know he could have hidden for so long.

I liked this one, but I have to admit, I think the books featuring Dare’s brothers will probably be a little bit better. I really liked the relationship between the Collins brothers, and I’m looking forward to getting into that more. They’re really supportive of each other, while not afraid to call any of the others out on their bullshit. (Except Dare’s ridiculous ideas about custody of Nathan.)

This is a good start to what will probably be a solid series by Carrie Ann Ryan.

Carrie Ann Ryan is the New York Times and USA Today bestselling author of contemporary and paranormal romance. Her works include the Montgomery Ink, Redwood Pack, Talon Pack, and Gallagher Brothers series, which have sold over 2.0 million books worldwide. She started writing while in graduate school for her advanced degree in chemistry and hasn’t stopped since. Carrie Ann has written over fifty novels and novellas with more in the works. When she’s not writing about bearded tattooed men or alpha wolves that need to find their mates, she’s reading as much as she can and exploring the world of baking and gourmet cooking.