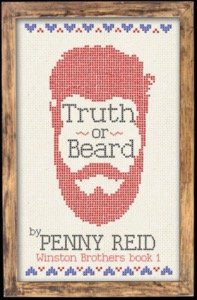 USA TODAY BESTSELLER
Beards, brothers, and bikers! Oh my!
Identical twins Beau and Duane Winston might share the same devastatingly handsome face, but where Beau is outgoing and sociable, Duane is broody and reserved. This is why Jessica James, recent college graduate and perpetual level-headed good girl, has been in naïve and unhealthy infatuation with Beau Winston for most of her life.
His friendly smiles make her tongue-tied and weak-kneed, and she’s never been able to move beyond her childhood crush. Whereas Duane and Jessica have always been adversaries. She can’t stand him, and she’s pretty sure he can’t stand the sight of her…
But after a case of mistaken identity, Jessica finds herself in a massive confusion kerfuffle. Jessica James has spent her whole life paralyzed by the fantasy of Beau and her assumptions of Duane’s disdain; therefore she’s unprepared for the reality that is Duane’s insatiable interest, as well as his hot hands and hot mouth and hotter looks. Not helping Jessica’s muddled mind and good girl sensibilities, Duane seems to have gotten himself in trouble with the local biker gang, the Iron Order.
Certainly, Beau’s magic spell is broken. Yet when Jessica finds herself drawn to the man who was always her adversary, now more dangerous than ever, how much of her level-head heart is she willing to risk?

My laptop is still being repaired. I’m still trying to do these posts on my iPad, so forgive me if they look a little strange or something is wrong. And it’s an iPad mini, not even a full-sized iPad. The keyboard is so tiny!

Anyway – on to Truth or Beard. I started out loving this book. Even with that dirty trick Duane pulled on Jessica, View Spoiler »He knew she thought he was his twin, Beau, but he took her into a room and made out with her because he’s always wanted to. « Hide Spoiler which I never became very fond of, I really liked it. It’s one of those books that it wasn’t until I had a little distance from it and looked back at it that I realized I hadn’t loved it quite as much as I thought I did.

Duane Winston was a bit of an oddity. He’s a 24-year-old mechanic from Tennessee who’s been in love with Jessica James, a 22-year-old math teacher, since they were kids. But he never acted on it because Jessica has always had a thing for his identical, and identically-ginger-bearded twin, Beau. Beau never pursued Jessica despite her crush on him because he always knew that Duane had a thing for her.

This was a cute, charming story. The biggest relationship drama came from Jessica’s desire to stay in town and teach long enough to save up enough money to explore the world. She didn’t want to just visit city after city and country after country. She wanted to really dive into each new location, stay long enough to live like a local and really see what the world has to offer. Duane is settled. He and his brothers own a house together, they own their fairly successful car repair shop together, and while he can’t say that he never wants to leave their small town, he has responsibilities and roots and he likes it there.

The non-relationship drama came from a local motorcycle club that was trying to strong-arm the Winston brothers into being their chop shop. They had something criminal on one of them and they were using that information to blackmail Duane and Beau. I didn’t love this, and based on where it was left, I’m assuming they’ll show up in future books, too. Especially because I think the Winstons got away a little too cleanly here; there’s no way that story line is over.

So why did I not love it as much as I initially thought? I don’t know. While the Winston brothers and Jessica were fully developed characters, the other secondary characters weren’t. Jessica’s brother Jackson was little more than a sputtering caricature of a small-town cop. Pulling people over, the Winstons specifically, just because he could, constantly swaggering around, threatening to arrest people if they don’t do what he wants. Once when he accused Jessica of planning to have sex with Duane (which….yeah), and she agreed that she was probably going to do just that, he called her ‘crude and unladylike’. Of course he’s just trying to protect her because big bad men like Duane take advantage of pure, innocent ‘nice girls’ like Jessica all the time. Never mind the fact that Jessica was the one usually trying to initiate sex with Duane. Jackson knows all about this because he lives in the real world, unlike Jessica who constantly has her head in the clouds. Or something.

Jessica lives with her parents and her brother, but we don’t really see her parents. Her dad shows up once in a while, and there’s a side story involving her family, but they don’t really show up on the page, giving the impression that the four of them just sort of float through each other’s orbits rather than being a family who’s really involved in each other’s lives.

The biggest eye roll I gave, however, was saved for this little gem. Duane and Jessica are discussing their sexual history, and Duane asks Jessica if she’s a virgin. She informs that she’s not because her hymen broke when she was thirteen on a horseback ride. For the record, she’s also had sex before, which is the actual reason she’s not a virgin. I just…. If I thought Penny Reid was making a statement on the sad state of sexual education in this country, or even just in Tennessee, I’d let it go, but I don’t think that’s it. And that…. that just isn’t how virginity works.

So overall,  a solid three-and-a-half stars from me. I liked it enough to read on, although I’m not sure how I’m going to really fall into book love with men named Billy, Cletus, Jethro, Beau, or a Roscoe. No offense to anyone with those names. They just aren’t really names I associate with romance heroes. Call me a snob; it’s ok, I can take it.

Penny Reid is the USA Today Best Selling Author of the Winston Brothers and Knitting in the City series. When she’s not immersed in penning smart romances, Penny works in the biotech industry as a researcher. She’s also a full time mom to three diminutive adults, wife, daughter, knitter, crocheter, sewer, general crafter, and thought ninja.