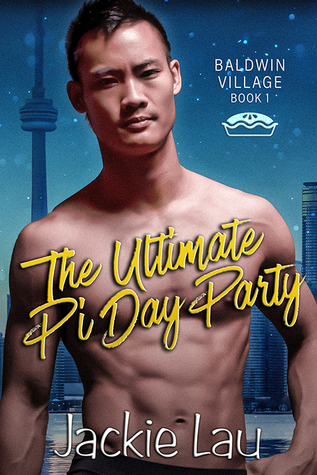 If there’s one thing that might get my dad, a retired math teacher, to visit Toronto and have a real conversation with me for the first time in seventeen years, it’s a big nerdy Pi Day party. And hopefully this party—and seeing the tech company I built from nothing—will finally be enough to impress him and make him forgive me for everything I did when I was a teenager.

But it’s got to be a really great party.

That’s where Sarah Winters comes in. She owns Happy As Pie, a sweet and savory pie shop, and wants to get into catering. She makes an amazing lamb-rosemary pie, cherry pie, lemon-lime tart…you get the idea. She’ll provide the food and help me plan the party, nothing more. No matter how much time we spend together, I’m not going to fall in love with her.

At least, that’s what I tell myself…

Once I got over my disappointment The Ultimate Pi Day Party being released on March 5 instead of March 14, I was completely hooked on it. I mean – I figured I would like it. I read Grumpy Fake Boyfriend last year and found it charming, so there was no reason to think this one would be any less.

From the outside, Josh Wu has led a fairly charmed life. He’s the CEO of Hazelnut Technologies, the company he started with his best friend Amrita, who is currently the CTO. It’s a company that… makes apps? I’m almost positive that’s what they do. He’s on the list of 35 Most Eligible Bachelors under 35, has more money than he knows what to do with, and at least a 6-pack, if not a full 8-pack. He’s good.

But all is not well with his family. He was a pretty typical teenager, but his dad took it as a personal affront, culminating with one reckless mistake at 16 that caused his dad to not speak to him for, so far, 17 years. Josh goes home once or twice a year, mainly at Christmas, and he and his mom and his sister have good relationships, but the entire time he’s home, is dad refuses to speak to him or even look at him. Josh misses his dad. His dad is also (typically for his age) anti-technology, so he doesn’t have any interest in Hazelnut Technologies, believing it to be just another hobby that Josh is going to play with for a while then abandon.

But Josh has a plan. His dad is a math professor, and has recently gotten himself a Facebook account specifically to post terrible math puns. Josh hatches a plan to host a pi day party. But not just any pi day party. Yes, the titular Ultimate Pi Day party. And no pi day party is complete without pie.

Enter Sarah Winters. Her new pie shop, Happy As Pie, is still trying to gain a foothold in the community. She has big plans for her business, and the catering job Josh is offering her is a perfect way to start that piece of it. Josh being gorgeous and kind and funny and smart certainly doesn’t hurt, either, as they spend more and more time together working on the menu and perfecting the pies.

The pies. Oh, the pies. Sweet and savory. lamb and rosemary, chicken and leek, pear ginger crumble, butter tarts, cherry pie…. I was so hungry while I was reading this book. And by all accounts, they’re as delicious as they sound. Josh’s plan is to lure his father to his home, which his father has never seen, for the Pi Day party. He’ll finally see the company that Josh and Amrita have built. Finally, finally his father will realize that Josh is no longer the teenage screwup he once was.

I really expected this to be a book about a hot sexy man and a lovely sexy woman making a lot of pie and having a lot of hot sexy times. And I certainly did get that. Josh and Stephanie together are fiiiiiiire.

But it was so much more than that. Both Josh and Stephanie have a lot of deep family issues that they’re trying to work through. These issues just keep rearing up and making this beautiful, special relationship a lot of work. Both of them had to work through the insecurities their family situations had saddled them with, and which would rear up at the most unfortunate times. Josh’s eventually get the best of him, causing him to break up with Sarah in a heartbreaking scene.

Have no fear, though. Jackie Lau’s trademark humor came through in this one. There were several scenes that had me laughing out loud at them, and I love books that can make me laugh as much as they make me cry. I mean, not literally cry, I don’t think I’ve ever done that with a book, unfortunately, but this one made me wish that I could.

Waiting on Wednesday – A Duke In Disguise by Cat Sebastian