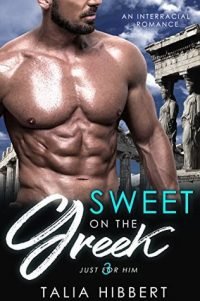 The only thing he can’t do is lose.

For millionaire footballer Nikolas Christou, one look is all it takes: the minute he sees Aria Granger, he’s a goner. Playboy Nik knows lust—intimately—but his need for Aria goes far beyond that. Of course, the plus-sized beauty isn’t interested in romance… but Nik isn’t interested in giving up.

Aria Granger has sworn off relationships for her own good. After all, her ex nearly murdered her best friend, so clearly her taste is questionable. When charming, gorgeous Nik bounds into her life, Aria can't decide if he's as innocent as he seems... or if her bullsh*t-ometer is broken.

The super-sweet sports star claims he needs a fake girlfriend to protect him from 'misunderstandings'. And Aria, with her tattoos, piercings and dangerous scowl, fits the bill. But there's no way a guy as handsome as Nik can be that bad at handling relationships.

Sweet on the Greek is red-hot, interracial romance featuring insta-lust and a guaranteed HEA - with NO cliffhanger and NO cheating. It stars a curvy, Black British heroine and a Greek, bisexual hero.

I loved this book! I’ve been in a bit of a slump recently, and this knocked me out of it. (At least I hope so. We’ll see what’s next).

Aria is my favorite kind of heroine – completely fucked up, but also aware of it. She’s in therapy and is actively working to take some control of her life back. She knows that she tends to gravitate toward toxic relationships, and she’s decided to avoid them for the time being. That does not, however, mean avoiding sex, because Aria is also that rare unicorn romance heroine who recognizes that you can, in fact, have one without the other.

When she meets Nik at Jenny’s wedding (you’ll remember Jenny and Theo from the first book in this series, Bad for the Boss, and if you don’t, what the hell are you waiting for?), there’s immediate attraction. Attraction Aria is very careful to avoid. She doesn’t trust him from the beginning and for once, she’s going to follow her instincts and not fall for the line of shit she’s pretty sure he’s feeding her.

Nik, for his part, has decided that his forced retirement from football (soccer, to us wacky Americans), that it’s time to give up his days of “carefree sluttery”. He’s ready to settle down and stop sleeping with every man and woman he crosses paths with. Even the ones that he only sleeps with because he’s such a nice guy and there just isn’t anyone else they could sleep with at the time. (Seriously. His best friends needed a third, but the guy considers himself straight, so they couldn’t have just anyone as their third, so Nik, being such a good friend, “volunteered as tribute”, as Aria put it.) But he’s ready. And the minute he meets Aria, he knows he’s done looking.

This had one of my favorite tropes – the fake relationship – and a few that I don’t really enjoy, like insta-love. But somehow it didn’t matter. Somehow Talia Hibbert is able to make me enjoy the book despite that. She manages to make her books real, and sexy, and so fucking hot, and also really funny at the same time. There’s a scene involving Aria nonchalantly sitting on top of her sex box (sox) pretending nothing is going on, and it’s hilarious. Nik was really sweet, and I didn’t think what he did was so bad. I got where Aria was coming from, though. Honesty and trust are a big, big deal to her, and when she thought Nik had betrayed that, she bolted. And, technically, he did betray that, though not really in the way Aria thought. I appreciated that even when she was mad at him, she was willing to listen to what he had to say. And I loved that she didn’t just hear one good grovel and run back to him. She waited until she was really ready to go back to him. Until she knew that she had worked through some of her issues and trusted him again.

One response to “Review – Sweet on the Greek by Talia Hibbert”