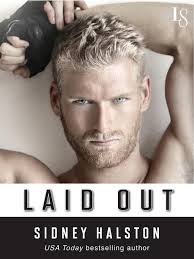 Laid Out by Sidney Halston
Series: Worth The Fight #4
Series Rating:

Perfect for fans of Monica Murphy and Cecy Robson, Sidney Halston’s scorching new MMA romance proves there are no holds barred when it comes to seduction.

Growing up an Army brat, Violet Channing could never meet her dad’s high expectations. But in the eyes of her best friend, she could do no wrong. He even insisted that he should be her first kiss. Now Cain Sorensen is all grown up, hardened by years in special ops and always looking for a good fight. Tall, with striking blue eyes and impossibly blond hair, he’s a modern-day Viking warrior. Of course, Violet’s all grown up, too, and she’s ready to surrender to his every command.   Cain knows he’s bad for Violet. His work is dangerous, and his hobbies are downright deadly. As a private mercenary and a mixed martial arts fighter, he could never let such an innocent soul into his world. And yet his most grueling combat training is no match for Violet’s killer curves, hot touch, and suggestive glances. Now all of Cain’s most explosive fantasies are coming true—but once they cross the line between friends and lovers, there’s no turning back.

I enjoyed the first three books of this series, but I have to admit, I do not understand the love for this one. The author has even mentioned that it was her favorite to write. I think I’m more disappointed than I would have been because I was so excited for this one. Cain and Violet have been on a collision course since she rolled into Tarpon Springs. And old friends to lovers is one of my absolute favorite tropes. So I tore through the first three books in the series in the span of a couple of days and eagerly opened this one up on my ereader.

This book actually angered me. I wasn’t even passively rolling my eyes and asking myself what these two people were doing, I was actively angry. So forgive me if this post gets a bit ranty. My biggest problem with this book was Cain. I was expecting a quiet, gentle giant somewhere along the lines of Dex from the Game Plan. That was my own expectation, not one that was ever explicitly spelled out, and it was based strictly on his behavior in previous books. Cain was nothing like that. He was a complete ass. He treated Violet like complete crap from the minute she got into town. I have never wanted a heroine to tell the hero to go fuck himself more than I did while reading this book. I understand PTSD and survivor’s guilt. I’m not coming down on him for those. But suffering from those does not give you the right to treat everyone around you like they’re pieces of dog shit you just stepped in while wearing your favorite shoes.

There was so much guilt in this book. Cain, Violet, and their friend Jeremy had been joined at the hip from the time they could walk. All raised together on Army bases, they stuck with each other over the years. Cain and Jeremy enlisted and went to Afghanistan, Jeremy and Violet eventually got engaged, then Jeremy was killed in action. Of course Cain and Violet have guilt about their feelings for each other. Of course it would be weird for them to get together. They needed to talk to each other about it. But they didn’t. Instead, they would both just sit there inner-monologuing about how it was wrong and Jeremy wouldn’t like it and Violet belonged to Jeremy and the guilt was horrible, then they’d lie to the other that everything was fine and go along their miserable ways. Every time. These two just could not or would not talk to each other. Violet would talk about everything except what she was actually thinking, and Cain would make her feel like shit then leave. Every single person in this book, Cain and Violet included, told Cain just how horrible he was being to her, but it didn’t change anything. He gave her a hard time about talking too much, but never listened to a word she said. He constantly berated her for every goddamn thing she did while simultaneously telling her that she shouldn’t listen to anyone and just do what she wanted. He strung her along, teasing her and making her think he gave a shit about her, only to cruelly push her away over and over and over again. It was like watching a montage of Lucy pulling the football from Charlie Brown. Violet would stand up for herself and tell Cain off, causing me to do a fist pump in my seat, only to immediately give in and go back to him. At one point, she showed up at WtF to work out, and even though he was on his way out the door, he stuck around and did another workout because he couldn’t bear the thought of the other guys in the gym looking at her. Not hitting on her, not touching her, just being in eyeball range in her ratty gym t-shirt and yoga pants. (This is while he’s actively telling her that he has no interest in her and she should go out and find someone else to date, by the way. Then showing up on those dates and going all caveman and scaring the dates away.) Then halfway through her workout, he suddenly gets in her face telling her that she’s doing everything wrong and is going to hurt herself, while pulling the pin out of the weight machine while she was in mid-fucking lift! That’s right, he’s berating her for not being safe enough while almost killing her and not listening to a word she says about the fact that this is her normal workout and she knows how to use the machines. I’m so pissed off I’m italicizing.

He made reference to her “cute tirade” when she told him off and was genuinely pissed at him for his crap, which I despise. At one point, after they spent what she thought was the first of many, many weeks together, staying together in their hometown and having really hot sex all over the place, he told her the minute they got back to Tarpon Springs that he was taking off for parts of the world unknown for an op, and he might be gone a month, he might be gone a year, he didn’t really know and off he went. She found out from someone else three months later that he had turned down the op and had actually moved out of town. There go the italics again.

I tried so hard to like Violet, and there was a lot to like about her, but I just couldn’t get behind her not only allowing Cain to treat her like he did but also to keep coming back for more. She was sweet and fun and funny and had absolutely no filter, which I love in a heroine. She was also the rare heroine who loved to eat and had a body that looked like she loved to eat. She wasn’t fat, but she was voluptuous and not the stick skinny we see from so many romance heroines who eat and eat and eat but still weigh next to nothing. But Violet clearly had absolutely no self-respect. It was really frustrating. Her father had been cruel to her about her weight for her entire life, and it had clearly done a lot of damage. Both of these people needed therapy.

I like this series, and I’m not giving up on it, but I really hope the rest of them don’t hit me as badly as this one did. A little more communication, a little less angst, a little more emotional equality in the couple would be fantastic. The previous book featuring Tony and Francesca, was fabulous. I’d love to see some more of that dynamic.

ARC Review – The First Rule of Hook-Ups by Nina Crespo

One response to “Review – Laid Out by Sidney Halston”