Posted May 3, 2015 by smutmatters in Contemporary, Reviews / 0 Comments 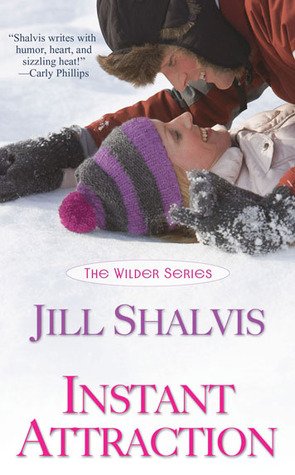 The first in a sensational new series, Jill Shalvis introduces Cameron, Stone, and T.J. Wilder--three bad-boy heroes who effortlessly mix breathtaking adventure and scorching sex appeal. . .Get Wild. . .And Then Get Wilder. . .Accountant Katie Kramer is a quintessential good girl--working hard, recycling diligently, all the while trying to ignore the feeling that she doesn't fit in anywhere. That's all she wants. Well, that--and amazing sex, and the kind of daredevil escapade she can look back on when she's crunching numbers in a dusty cubicle. Which explains why she just took a job in Wishful, California, working for Wilder Adventures and Expeditions. Waking up to find a magnificently built stranger towering over her bed--that part defies explanation. . ."Shalvis writes with humor, heart, and sizzling heat!" --Carly Phillips "Jill Shalvis sweeps you away." --Cherry Adair

“Live life balls out” is Katie Kramer’s new mantra. After being the only survivor of a terrible bridge collapse, she takes a look at her life and realizes it’s been stagnant. She was an accountant, and her life was as boring as a stereotypical accountant’s life would be. She’s never done anything unexpected or off her life’s plan. She feels a lot of survivor’s guilt because of that, thinking that her life was worth less than the lives of the hundred or so other people who died, and she decides to change everything. She leaves her home, family, and job in L.A. and drives off to parts unknown, eventually ending up in Wishful, CA. Specifically, she ends up taking a temporary admin job at Wilder Adventures, an outdoor adventure company. She doesn’t know anything about the winter sports they specialize in, but as part of her new outlook on life, she decides she wants to at least try most of them.

Cam Wilder was a professional snowboarder until a crash resulted in a career-ending injury. Unable to compete anymore, he didn’t know what to do with his life and took off, not returning home for a year. When he does finally get home, it’s to find a strange woman in his bed, since no one had been expecting him and the family had given his cabin to Katie to use while she was working there.

Sparks fly pretty quickly, though both Cam and Katie fight it. Cam fights it harder than Katie does. Katie’s temporary job is only supposed to last for a total of one month, down to under 3 weeks by the time Cam arrives. They both recognize that what’s between them is stronger than a fling, and neither are willing to start it with an expiration date. Until they are both willing to do exactly that. I really loved this story. Both of these people were damaged by their pasts, and frankly, it was a relief for me to read about people who were damaged by events and not by other people. This is just a me thing, but I’ve been reading a string of books recently involving “I can’t be with you because my ex was a jerk and I can never trust again” issues and it was refreshing to read something different. They were both inspired by the other to get through their issues, but had to do the work and get there on their own. Cam put his unwillingness to get back on a snowboard aside in order to help Katie try out some of the activities she wanted to try, and Katie was able to make Cam see that even though he can never compete professionally again, he still has a lot to offer Wilder Adventures, himself, and other people, her included. He sees that Katie is terrified by some of the new events she’s trying out but barrels through them anyway, not letting her fear rule her anymore.

The secondary stories were less well-crafted, but still enjoyable. Annie is apparently an older woman who raised the boys, and there’s a reference to hot flashes, but she’s only “getting ready to turn forty”, so I have a rough time considering her to be the older curmudgeon she’s portrayed as at times. She was going through her own relationship issues with her soon-to-be-but-maybe-not ex, and at times her sheer pigheadedness was hard to take. I did love the other women we met in the story, some of whom I’m guessing will show up in future books. Serena, Cam’s ex, makes an appearance, and though she starts off a fairly stock vindictive ex character, she quickly becomes a lot more than that, even in the few scenes she’s in. One scene in particular had me actually laughing out loud. I believe this series is only a trilogy, so I’m pretty sure she doesn’t get her own book, but I hope she at least shows up in the next two.

One question I had while reading this book – Do eyeglasses fog up just from the wearer getting turned on? Katie’s glasses are constantly fogging up when she looks at Cam. It’s entirely possible that this happens, I’m just not aware of it. I wear reading glasses if I’m spending a lot of time on the computer, but they’re just drugstore glasses, not prescription, so I’ve never had this problem.

This book is really charming, really fun to read, and one of my favorites by far. This is at least the third time I’ve read it, but for some reason I’ve never read the next two in the trilogy. I’m going to read them soon, especially because I have no idea why I wouldn’t go on.