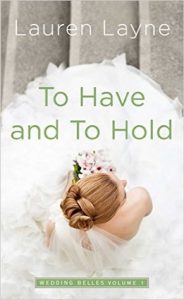 To Have and to Hold by Lauren Layne
Series: The Wedding Belles #1
Series Rating:

USA TODAY bestselling author Lauren Layne is the “queen of witty dialogue and sexy scenes” (Rachel Van Dyken)! Now, Sex and the City meets The Wedding Planner in The Wedding Belles, her sizzling brand new contemporary romance series about three ambitious wedding planners who can make any bride’s dream come true... but their own.
Discovering her fiance is an international con man just moments before they exchange vows devastates celebrity wedding planner Brooke Baldwin's business—and breaks her heart. Now a pariah in Los Angeles, she seeks a fresh start in New York City and thinks she’s found it with her first bridal client, a sweet—if slightly spoiled—hotel heiress. Then she meets the uptight businessman who’s holding the purse strings.
Seth Tyler wishes he could write a blank check and be done with his sister Maya's fancy-pants wedding. Unfortunately, micromanaging the event is his only chance at proving Maya’s fiance is a liar. Standing directly in his way is the stunning blonde wedding planner whose practiced smiles and sassy comebacks both irritate and arouse him. He needs Brooke’s help. But can he persuade a wedding planner on a comeback mission to unplan a wedding? And more importantly, how will he convince her that the wedding she should be planning... is theirs?

I know the blog’s been a little quiet recently – sorry for that. There’s been a lot going on at home, and Rob and I just got back from a 10th anniversary trip to Rome and London, so it’s just been a little bit crazy. But I’m back now and I’m planning to get a lot more regular with my posts, so here we go.

And I’m thrilled to have my first review in a while be a book that I enjoyed so much. To Have and to Hold was exactly what I was looking for. It was sexy, charming, and sweet, perfect for a long flight.

Seth Tyler is the new CEO of Tyler Hotels. He was promoted after his father’s unexpected death, which Seth hasn’t gotten over yet. Not only the fact of his death, but also that everyone else knew about his father’s heart condition and decided to keep it from Seth. They knew that Seth would never accept that his father’s condition was terminal, that his controlling nature would drive him to do everything he could, find every experimental treatment and medication to try and fix it, no matter what his father wanted. Seth happily owns up to this, to being controlling, and needing everything around him to be orderly and never hidden.

Which is why he does NOT trust his sister, Maya’s, fiance, Neil, despite the fact that he’s never actually met him. He’s barely even heard the man’s name from Maya, so when she announces they’re getting married seemingly out of the blue, Seth is immediately suspicious. This annoyed me a lot less than I would have expected it to. Maya is an adult, and for Seth to just assume that she can’t make her own decisions without his interference would normally grate on me. It doesn’t this time, though. Mainly because it’s clear that his suspicion comes from a genuine love for his sister, and never once does he imply that any deception from Neil would be a result of Maya being dingy or an airhead. He knows that she’s lonely, and insanely wealthy, a combination which could make her a target for a con man. For once I didn’t get the impression that the overbearing big brother thought his silly younger sister just couldn’t make her own decisions.

Brooke Baldwin is a new transplant to Manhattan. She’s just moved across the country to escape a bad situation in L.A., which I won’t spoil. A wedding planner, and she’s just been hired by the Wedding Belles, the top wedding planning outfit in New York. After everything that happened in L.A., she’s thrilled to be working with any wedding planner, much less the elite Wedding Belles. She’s even more thrilled when she gets to Manhattan and genuinely likes everyone at her new company. She’s assigned to be Maya’s wedding planner and initially thinks Seth is Maya’s groom when they meet. A groom she’s highly and inappropriately attracted to. Once that’s cleared up, there’s no reason she and Seth can’t get together. Well except for Seth’s rigid control of everything and Brooke’s still-bruised heart.

Sarcasm and good banter in romance novels are my kryptonite. Seriously, I love the great sexy-times, but anyone can have great sex if the chemistry is right. It takes a lot more than that to really sell a relationship. A couple can have all the amazing sex in the world, but if they can’t talk to each other, if they can’t have fun together, then what’s the point? (Obviously this is regarding books where the relationship is the point. Erotica stories or any other where an HEA isn’t the end goal are a different ballgame.) And the sarcasm and banter between Seth and Brooke is so fun. They both give as good as they get, and they both get the upper hand as often as the other.

Which is good, because Seth and Brooke are thrown together a lot, both because he insists on tagging along to all of Maya’s appointments, (he tells Maya it’s because he’s the one with the checkbook and wants to check everything out, but it’s really because he wants to check out Neil)  and because Maya, recognizing the sparks between them, is constantly scheming to get them together. But even once they acknowledge the feelings between them, it’s still not easy for Maya and Seth to get together. Since Seth is paying for Maya’s wedding, Brooke still feels like it would be a conflict of interest for them to start sleeping together. Seth, for his part, thinks, correctly, that Brooke isn’t interested in a casual relationship, and he doesn’t want anything more than that. He doesn’t think he can do anything more than that.

The buildup between Seth and Brooke was slow and so worth the wait. The sexual tension between them was a delight to watch, both before and after they acknowledged it and acted on it. I didn’t always understand their reluctance or their reactions to each other, but everything they did made sense for them.

This was a great start to a new series by Lauren Layne. I really liked the entire staff at Wedding Belles, and I can’t wait to watch them fall one by one. Lauren Layne does ensembles like this so well. There are always some I like more than others, but it’s rare for me to genuinely not like someone. (Jackson from I Wish You Were Mine was the rare exception) Heather Fowler is up next, and I’m eager to read her story. It’s clear she’s hiding something, and I do love uncovering someone’s secrets.