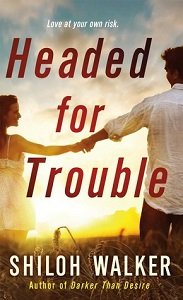 SHE'S A SMALL-TOWN GIRL WITH BIG DREAMS.
Nine years ago, Neve McKay fled her small Southern town and disapproving family to seek a career in the big city. Now she's finally coming home - and hoping for a fresh start. But the relationship that shattered her world still haunts her. And even among her nearest and dearest, she doesn't feel safe.
CAN THIS BAD BOY BE THE ANSWER TO HER PRAYERS?
Ian Campbell is a pure Scottish muscle - as hard and handsome as they come. But when Neve walks into his bar, his heart melts . . . and he vows to have this gorgeous and somewhat vulnerable woman in his life - for better or for worse. What is Neve's tragic secret? And how can Neve expect Ian to protect her, when doing so could put his own life at risk? The only thing Ian knows for sure is that he will do whatever it takes to keep her out of harm's way - and in his loving arms.

This is another one that took me some time to get into, but once I did, I liked it. I must be going through a weird stretch of reading right now.

This was a really great start to a new series more than a fully-realized story on its own. I love Shiloh Walker’s writing, and this series looks to be really good, but there was a lot going on, a lot of which was set up for future books.

Neve and Ian’s relationship worked for me. I was a little worried it was veering into insta-love territory, but it turned into a little more insta-lust with some genuine interest, which I enjoy very much. Neve was smart and resourceful. A lot of women, a lot of romance heroines, would have tried harder to keep their past a secret because they were ashamed or felt like they were to blame. Neve definitely felt that way a bit, but she was also smart enough to know that she needed to tell her best friend the sheriff and the people closest to her what had happened so they could keep a watch out. She wanted to get on with her life badly enough to refuse to be coddled and refuse to be escorted everywhere, but she was smart enough to take the advice of other people and not be out alone for too long or in the dark. She stayed with Ian for several nights, too, which probably wasn’t too much of a hardship.

In the beginning, it’s tempting to pass Neve off as a poor little rich girl. Her family is the wealthiest in the county, they own everything, and here’s Neve acting out and getting into trouble for attention. When you keep reading, though you realize she’s also been through a lot, and it’s not quite as cliched as it could be. She’s the youngest by five years and ten years, and it’s not hard to see how her siblings do such a terrible job with her after their parents die. At that point, Neve is 8, Brannon is 13, and Moira is 18. Neither the 13 year old nor the 18 year old have any real interest in an 8 year old, so Neve, who was trapped in the car with her parents when they were killed in a car accident, doesn’t know what to do but act out. One fight too many and she takes off for parts unknown and doesn’t come home for a decade. Which is where we find ourselves when this book opens.

This is really Neve’s story, even more than it is her and Ian’s. Ian is a fine hero, but he’s not quite as fleshed out as Neve, and even though he’s ostensibly in the main story line, he’s not really in it as much as you’d think. He’s Scottish, he wears a kilt, he owns a pub, he speaks in a lovely Scottish brogue. This just isn’t really his story. He’s there to give Neve a reason to stick around her hometown and to let her see that her life can be really, really good again. He does an admirable job of that, and Neve is smart enough to realize and to work on her relationships with her siblings.

There was quite a bit of setup for the next book here, too, which comes out later this year. Shiloh Walker is a must-buy for me, so I’ve already pre-ordered that one, and you should, too. After you read this one.

One response to “Review – Headed for Trouble by Shiloh Walker”