Posted May 27, 2016 by smutmatters in Historical, Reviews / 0 Comments 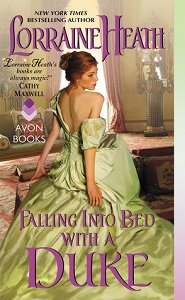 In the first in a dazzling new series, New York Times bestselling author Lorraine Heath introduces the Hellions of Havisham—three charismatic rogues destined to lose their hearts...
After six unsuccessful Seasons, Miss Minerva Dodger chooses spinsterhood over fortune-hungry suitors. But thanks to the Nightingale Club, she can at least enjoy one night of pleasure. At that notorious establishment, ladies don masks before choosing a lover. The sinfully handsome Duke of Ashebury is more than willing to satisfy the secretive lady's desires—and draws Minerva into an exquisite, increasingly intimate affair.
A man of remarkable talents, Ashe soon deduces that his bedmate is the unconventional Miss Dodger. Intrigued by her wit and daring, he sets out to woo her in earnest. Yet Minerva refuses to trust him. How to court a woman he has already thoroughly seduced? And how to prove that the passion unleashed in darkness is only the beginning of a lifetime's pleasure?

Right now I’m glomming. I haven’t read anything by Lorraine Heath before, and wow, have I been missing out. I was charmed by this one from the beginning. Minerva (I love that name) has had six seasons and she’s decided that she’s done. The only men who have shown any interest in her are fortune-hunters, so down on their own luck that all they want is her dowry. These men were incredible. They couldn’t even be bothered to pretend they wanted anything other than that dowry. Minerva has no interest in marrying because of her age or her dowry or for any reason other than love. And given how outspoken she is, and how many of her own opinions she has and very much enjoys discussing, most of the men in her circles have overlooked her or downright dismissed her as a termagant (a word I didn’t know, but Heath used several times here. It’s quite fitting).

Since she’s decided to officially stop courting husbands, and since several of those opinions she’s forever expressing is that women should be able to act on their desires as easily as men can, she sets out to experience one night in the infamous Nightingale Club. One night of masked pleasure, one night to discover exactly what all the fuss is about and exactly what she’ll be missing out on for the rest of her life. At the Nightingale Club, all the women wear masks while the men do not. So Minerva has no trouble recognizing the Duke of Ashebury when he selects her to be his companion for the night. He doesn’t know who she is, though.

And, actually, that first night, not much happens between them. A scorching kiss, but that’s it. Once he discovers that his lovely Lady V is a virgin, Ashe informs her that he doesn’t deflower women and sends her on her way. He can’t quite get her out of his head, though. He can tell she’s a member of the aristocracy, but that’s all he can deduce. With no idea who she is and no way to find out, he has no choice but to break his own rule about never selecting the same lady twice. He goes back to the club again and again looking for her. And Minerva goes back, too, since she never actually got the night of passion she was after.

A deliciously fun game of cat and mouse ensues. In quick order, Ashe thinks he might know who is mysterious Lady V is, but he can’t quite catch her. Just as the two of them are beginning a real relationship, some information comes to light that Ashe knows may cause Minerva to dismiss his attentions. Ashe has to do everything he can think of to make sure Minerva knows he really does love her.

This was everything I love about historicals. It was sweet, sexy, and fun. The banter between Minerva and Ashe, especially when he was trying to trick her into admitting she was Lady V, was a joy to read. This may be the first Lorraine Heath book I’ve read, but it will definitely not be the last.