In the first novel of Maya Rodale's enthralling new series, an English duke vows to make an American seamstress his duchess...

In Gilded Age Manhattan, anything can happen...

Seeking a wealthy American bride who can save his family's estate, Brandon Fiennes, the duke of Kingston, is a rogue determined to do the right thing. But his search for an heiress goes deliciously awry when an enchanting seamstress tumbles into his arms instead.

...and true love is always in fashion

Miss Adeline Black aspires to be a fashionable dressmaker—not a duchess—and not even an impossibly seductive duke will distract her. But Kingston makes an offer she can't refuse: join him at society events to display her gowns and advise him on which heiresses are duchess material. It's the perfect plan—as long as they resist temptation, avoid a scandal, and above all do not lose their hearts.

I know. I haven’t posted anything in so long. I just…. I haven’t had the bandwidth for it. The world is shit and getting shittier, I can’t sit and focus on a book, and I don’t feel like it’s fair to write a review of a book I was distracted while reading. And now I’m massively behind on ARCs and reviews, which is adding to the stress. I own a business, and business is booming, which is great, but taking away a lot of my reading and reviewing time.

Those are all reasons, not excuses. But they’re valid, and they’re all I can say. And at this point, all I can do is move forward and do what I can.

Fortunately for me, Maya Rodale was here for me. I go through phases with historicals, and I decided to pick this one up in hopes of breaking this massive reading slump. It worked! Sort of. I’m struggling again, but I certainly flew through this one.

I haven’t read much fiction that takes place in the Gilded Age, and it was fascinating. I really can’t recommend this enough. I hope we start to see more romances set in this period because I really enjoyed myself reading it.

Adeline Black is a seamstress who knows she’s better than the dressmaker she works for. She has dreams of owning her own dressmaking business, finally being able to bring into being the designs that she spends her time creating. For now, she works hard, doing fittings and making predictable, boring dresses that her boss makes.

Brandon is a typical duke – title and land, but no money to support himself or his household. Like so many of his peers, he’s come to America to find an heiress to marry. Marrying strictly for money isn’t his first choice, but it’s important to him to be able to take care of his mother, sisters, and the entire household that’s depending on him, so he’s going to do it. He’s thrilled when he meets Adeline – she’s stunning, flirty, and based on her clothing and the fact that she’s staying in the same hotel as him, has enough money to be his heiress. He never thought he’d be so lucky as to find all of it in one woman.

Except… he hasn’t. Adeline is well-dressed because she wears her own designs, and she was in the hotel because she was meeting with a client to do a fitting. By the time he finds this out, though, he’s having more feelings for her than he’s comfortable with, and he doesn’t know what to do about it.

My god, you guys. This was so good. Adeline is so smart. She’s resourceful, too, as we realize when Brandon inadvertently gets her fired from her position. She’s not afraid of Brandon, or impressed by his title, and she doesn’t have a problem telling him exactly how the world works for those who aren’t as privileged as he is.

And Brandon, for his part, really listens to her. He doesn’t dismiss what she tells him about the differences in how the world sees them and treats them. He looks around and realizes that she’s right. He recognizes his privilege, and while he also recognizes how he can’t change how the world treats him, he can treat how he reacts to it and how he allows those people in his world to be treated. And he works to change it.

This was so good. It’s going on my keeper shelf, and I’ll pull it out any time I need a pick-me-up. And, of course, the best part – all of Adeline’s dress designs had pockets. I loved the way such a small (to me) thing was so revolutionary to the women she introduced it to. Even now, in 2019, we’re trying to get pockets into dresses, and for the women Adeline worked with, this was a concept they’d never even considered. Seriously – this was so good. If you haven’t read it yet, do so immediately.

Maya Rodale began reading romance novels in college at her mother’s insistence. She is now the bestselling and award winning author of numerous smart and sassy romance novels. A champion of the genre and its readers, she is also the author of the non-fiction book Dangerous Books For Girls: The Bad Reputation Of Romance Novels, Explained and a frequent contributor to NPR Books, The Huffington Post, Bustle and more. Maya lives in New York City with her darling dog and a rogue of her own. 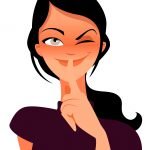