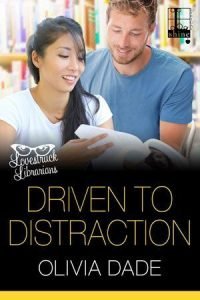 IF THE BOOKMOBILE’S ROCKING . . .
Constance Chen is not the demure kind of librarian. Sure, her high-horsepower ride is Big Bertha the Bookmobile, but Con swears a blue streak, does her own home improvement, and wears steel-toed boots. She has a tight circle of friends, a demanding, beloved sprawl of a Chinese-American family, and a strict hookups-only policy when it comes to men. Her life is just how she wants it. Except for one maddeningly sexy footnote.
Sam Wolcott, her friend’s baby brother and the library’s IT star, has been throwing sparks with Con since he moved to town. To everybody else, he’s a thoughtful, sensitive sweetheart. To Con, he’s a cantankerous pedant, because if they don’t fight nonstop their clothes will spontaneously combust. Sam needs a commitment Con won’t—can’t—give. And neither of them will chance their hard-won bonds for pure lust.
Too bad Con and Sam have a whole week in a very tiny, very private space to sustain their dumb arguments. Alone. What happens in the Bookmobile might take their resistance right out of circulation . . .

Ok – seriously. Where can I get a job driving a Bookmobile around?

Con and Sam have been battling the attraction between them for years. Years. Both of them. The only reason they’ve been fighting it is that Penny, Sam’s newly re-discovered sister, is Constance’s best friend. I’ve been pretty clear on this blog in my feelings on this topic. It’s a pretty thin premise. Penny’s a big girl. She can handle two people she cares about having feelings for each other. And as we discover mid-way through the book, she’s well aware of their feelings and is just fine with it.

I really liked Sam. A lot. A lot a lot. He was the sexy, lumberjack-esque IT guy assigned to ride around with Con in her Bookmobile in order to help her figure out why the internet connection in the van went wonky every time she got to a certain area. Being in such close confined quarters makes it really difficult for both of them to control their raging hormones.

I liked this book, I loved the story, but I didn’t love Constance, which killed it for me a little bit. She was determined not to get involved in a relationship, and her reasons, while not completely rational, were valid. But in her determination, she was cold and selfish with Sam. You have to be willing to compromise in a relationship of any kind, and I never saw that from Con. Whether it was something huge like plans for the future, or something small like whether or not to go out on an actual date, she was completely unbending. Then when there was an issue that was too big to compromise on, she had no give. It was always Sam who had to give in. There was none of the back and forth that’s necessary for a healthy relationship.

There are some things that are too big to compromise on, and when they come up against something, they go their separate ways, and once again it’s up to Sam to give in. I probably would have been more ok with him making such a huge concession, but since he’d been doing all of the conceding, it rubbed me the wrong way.

This wasn’t a bad book; I definitely enjoyed parts of it, especially the Bookmobile itself. Con and Sam had great chemistry, whether they were in bed, out on a date, or snarking at each other in the Bookmobile. I didn’t have any issue tracking everyone, even though it was the fifth book in the series. It can easily be read as a standalone. It was clear there were stories I’d missed, but they didn’t take anything away from this story.

While I was growing up, my mother kept a stack of books hidden in her closet. She told me I couldn’t read them. So, naturally, whenever she left me alone for any length of time, I took them out and flipped through them. Those books raised quite a few questions in my prepubescent brain. Namely: 1) Why were there so many pirates? 2) Where did all the throbbing come from? 3) What was a “manhood”? 4) And why did the hero and heroine seem overcome by images of waves and fireworks every few pages, especially after an episode of mysterious throbbing in the hero’s manhood?

Thirty or so years later, I have a few answers. 1) Because my mom apparently fancied pirates at that time. Now she hoards romances involving cowboys and babies. If a book cover features a shirtless man in a Stetson cradling an infant, her ovaries basically explode and her credit card emerges. I have a similar reaction to romances involving spinsters, governesses, and librarians. 2) His manhood. Also, her womanhood. 3) It’s his “hard length,” sometimes compared in terms of rigidity to iron. I prefer to use other names for it in my own writing. However, I am not picky when it comes to descriptions of iron-hard lengths. 4) Because explaining how an orgasm feels can prove difficult. Or maybe the couples all had sex on New Year’s Eve at Cancun.

During those thirty years, I accomplished a few things. I graduated from Wake Forest University and earned my M.A. in American History from the University of Wisconsin-Madison. I worked at a variety of jobs that required me to bury my bawdiness and potty mouth under a demure exterior: costumed interpreter at Colonial Williamsburg, high school teacher, and librarian. But I always, always read romances. Funny, filthy, sweet—it didn’t matter. I loved them all.

Now, with the encouragement of my husband and daughter, I’m writing contemporary romantic comedies as Olivia Dade and futuristic romances as Olivia Dart. I have my own stack of books in my closet that I’d rather my daughter not read, at least not for a few years. I can swear whenever I want, except around said daughter. And I get to spend all day writing about love and iron-hard lengths.

So thank you, Mom, for perving so hard on pirates during my childhood. I owe you.