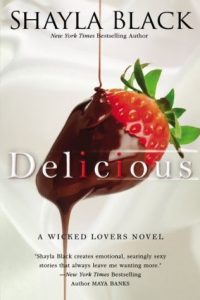 If you have a problem with the word “Fuck” or don’t like the phrase “Fuck you”, then you’ll want to skip this review. In fact, let’s get the first one out of the way. Fuck you, Luc Traverson. Fuck you so hard. And NOT in a fun way.

Luc Traverson has to be one of the worst piles of garbage I’ve read in a romance novel. This guy… I hated him. In fact, I was going to DNF this one, but I talked to someone at Lori Foster’s Reader Author Get Together who said he got better, so I decided to finish it. Which turned out to be a mistake. Because he did not.

I can get over him assuming Alyssa was sleeping with her bouncer, Tyler. I’m sure that I would have thought the same thing, because Tyler made sure everyone thought he and Alyssa were sleeping together. I don’t care about that. What I care about is that when he asked Alyssa about it, over and over and over and fucking over, she said she wasn’t sleeping with Tyler, and Luc continued on thinking she was lying. And calling her a liar. To her face. Because, you see, Alyssa is a stripper. And therefore, there’s no possible way she could ever not sleep with anyone with a cock. Someone vandalizes her car, so she calls the sheriff. He assumes she’s sleeping with him. Luc is new in town, and Alyssa tells him that he should double check that the motel owner hasn’t given away his room, which he’s been known to do. She dials the number and hands him the phone, and he assumes she has the number stored because she turns tricks. She tells him that it’s because the customers at the strip club get drunk and need a place to stay, so she calls the nearby motel to get them settled. “(He) liked her explanation much better. But still, he wondered. Didn’t a lot of strippers earn extra cash on the side?” Because she’s a stripper, which automatically means she’s also a sex worker. Oh, and it also means she’s definitely a liar. He compliments her on how well the new restaurant looks, and she tells him that some of the club’s customers were able to give her some advice because they’re in construction, and he thinks about “…the favors she’d likely had to give her loyal customers to obtain their advice.” Every single fucking time he asked her a question, he accused her of lying when she answered. Every. Single. Time.

“The night you spent with me, I told you there hadn’t been anyone in two years. There’s been no one since you.”

Luc shook his head, looking as though a hundred different thoughts blazed through it. “Alyssa, you could be in danger. I need you to be completely honest.”

Jerking around in her seat, she faced him, trying to keep a lid on her temper. “I have been honest. Just because you don’t believe me doesn’t make me a liar.”

“C’mon,” he growled. “Not a customer who wanted just a bit more after seeing your gorgeous breasts naked? Not a contractor who did you a favor and wanted something in return?”

If I hadn’t already hated him so much, his shock at finding out she had an MBA would have made me laugh out loud. He’s talking to Tyler, who’s filling him in on it. (Bonheur is the name of the restaurant Alyssa is currently opening. Mainly because she wants out of the stripping business.)

“…LSU, Lafayette campus. She graduated with honors, too….”

“And the wait staff at Bonheur? Are they all in school and elected to wait tables?”

“Most. Every few months, Alyssa gathers the girls to talk about life after the pole. If they want to get an education, she helps them find tuition assistance and apply for scholarships. She encourages them to make more of themselves. A couple of the girls just want to keep better hours so they have more time for their kids.”

Wow. He hadn’t seen the caring side of Alyssa. This news surely brought her into a whole new dimension. “Couldn’t these women make more money stripping and…taking customers on the side?”

“Turning tricks?” Tyler raised a brow. “You’re damn lucky Alyssa didn’t hear that. She’d skin you alive and boil you in oil. That shit doesn’t happen here. Period. ‘Course she can’t stop a dancer willing to entertain customers after hours and off premises, but she usually ends up firing them since they’re often trouble.”

The other problem I had with Luc was his constant jumping to conclusions without actually absorbing any information. Even if he gets the information, if it doesn’t jibe with what he’s thinking, he just dismisses it. He apologizes for letting his “darkness” get the best of them the first time they had sex (in the previous book). He tells Alyssa that he’s sorry for what he did to her. She responds with “You’re sorry for making me orgasm so many times I lost count?”, and he keeps telling her how awful it was for her and how sorry he is. He’s not even listening to her. Even in his own head he’s not bothering to confirm anything – “Even if she wanted children – and why would she? – he didn’t think she’d agree to dash to the nearest sperm bank or sit through rounds of in vitro fertilization. She’d want a man who could father his own children the normal way.” They’ve never had a conversation about kids. He just assumes all of this, over and over.

And Luc is obsessed, OBSESSED, with having babies. He had a bad fever as a kid, which rendered him sterile, and now it’s the only thing in his head. And Alyssa, what with being a lying whore and all, is not going to be the mother to the kids he ends up adopting. He tells us repeatedly that Alyssa isn’t what he’s looking for. At one point, he actually thinks to himself that he’s looking for a lady, a respectable mother figure, not a whore. So, again. Fuck you, Luc Traverson.

And, of course, you can guess where the Luc-is-sterile plot line went. Obviously, Alyssa ends up pregnant. I couldn’t figure out Luc’s reaction to this even after re-reading the section more than once. He knew it wasn’t his, couldn’t possibly be, even though he had just been thinking a few chapters ago about going and getting everything retested. So obviously it’s Tyler’s. Which Luc decided to deal with by… marrying Alyssa? I guess. It didn’t make a lot of sense to me. He had never told Alyssa that he was sterile, so she had no idea there was even a question in his mind about the baby being his. She assumed when she told him tht she was pregnant, that he knew it was his. She had no idea that he took it as further evidence of her constant lies. The fact that he hadn’t told her he was sterile didn’t register with him as an issue, because why would it matter to a woman who was so far from his ideal “lady” anyway?

Under other circumstances, I probably would have liked  Alyssa, but the fact that she didn’t tell Luc to go fuck himself repeatedly made me lose a lot of respect for her. In every other aspect of her life, she had her shit together, but with this guy she just continued to let him treat her like something he scraped off the bottom of his shoe.

And, unfortunately, this was my first Shayla Black. I’d like to read more, because the writing was good and the sex scenes were hot, but any author who gives me this walking pile of human trash and asks me to root for him is a writer who’s lost my trust.

Raised an only child, Shayla occupied herself with lots of daydreaming, much to the chagrin of her teachers. In college, she found her love for reading and realized that she could have a career publishing the stories spinning in her imagination. Though she graduated with a degree in Marketing/Advertising and embarked on a stint in corporate America to pay the bills, her heart has always been with her characters. She’s thrilled that she’s been living her dream as a full-time author for the past eight years.

Shayla currently lives in North Texas with her wonderfully supportive husband, her teenage daughter, and two spoiled tabbies. In her “free” time, she enjoys reality TV, reading, and listening to an eclectic blend of music.