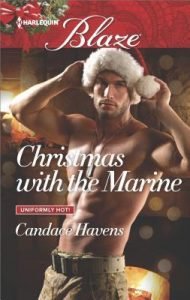 Subject: Major Ben Hawthorne
Mission: To make one sexy civvie's Christmas wish come true
Christmas is almost here, and guys are the last thing on personal shopper Ainsley Garrett's list. But her icy resolution melts when she sees an incredibly hot Marine shopping for toys. A man in uniform with a hot bod and a heart of gold? Maybe a gal can believe in Santa after all…
Major Ben Hawthorne has his career to think about, but when it comes to Ainsley, he's willing to break his own rules, at least for one night—provided they can get this insanely wicked attraction out of their system. Only, once isn't enough. Now Ainsley's checking her list twice…before she falls for a Marine who's naughty and nice.

The holiday season really lends itself to the fake-relationship trope. There’s so much pressure from family and friends (mostly family) and we just want to show them all how great we are and how well we’re doing. Allegedly well-meaning family members make barbed comments about our single status or child-free status, and sometimes it’s just easier to get a good friend or complete stranger to pretend to be a partner and act as a shield. (The inherent flaw in this plan is that as soon as you can be shown to be dating someone, the questions immediately morph from “When are you ever going to find a nice boy?” to “When are you two lovebirds getting married?” Literally within the same conversation. You cannot win.)

Ainsley doesn’t really need Ben to be a full-blown boyfriend, just a date to her parents’ Christmas party so that her dad won’t spend the entire evening introducing her to random single rich men he knows. Ben needs Ainsley, who is a professional shopper, to help him get gifts for his CO, his family, children withthe Toys for Tots campaign and the elderly residents of a nearby nursing home. (He lost a bet) Ainsley is a professional shopper, one who Ben cannot afford, so clearly, there is a bargain to be struck here.

Side note – professional shopper sounds like an amazing job. I hate shopping, but that’s because I hate trying on clothes, and no matter how far I come in my career or how well I do, I always feel a little bit guilty spending money on frivolities. But I do enjoy finding the perfect gift for someone else. And having someone else’s much higher budget with which to do that sounds amazing.

Anyway, Ben and Ainsley agree to help each other out for the holidays, and if a little tension-easing mind-blowing sex gets added into the bargain, then it’s going to be an even merrier Christmas.

This was a fun, charming holiday read. There wasn’t anything groundbreaking here, but I liked Ben and Ainsley, though Ben could be a little too perfect at times. Seriously, I don’t think he had any faults. Except for his aversion to junk food. But he had a six-pack, cooked amazing food, helps out kids and the elderly at Christmas, looks hot in his dress blues, and says all the right things to Ainsley at all times. He could have been a little more real for me.

Bestselling author Candace Havens has published more than 25 books. Her novels have received nominations for the RITA’s, Holt Medallion, Write Touch Reader Awards and National Readers Choice Awards. She is a Barbara Wilson Award winner. She is the author of the biography “Joss Whedon: The Genius Behind Buffy” and a contributor to several anthologies. She is also one of the nation’s leading entertainment journalists and has interviewed countless celebrities from George Clooney to Chris Pratt. Her entertainment columns are syndicated by FYI Television, Inc. She is the Executive Editor, and Editorial Director for the Embrace and Indulgence lines at Entangled Publishing. Candace also runs a free online writing workshop for more than 2000 writers, and teaches comprehensive writing classes. She does film reviews with Hawkeye in the Morning on 96.3 KSCS, and is a former President of the Television Critics Association.

One response to “Review – Christmas with the Marine by Candace Havens”