Coen Steele has spent the last five years serving his country. Now that he's back, he's finally ready to leave behind the chaos of the battlefield and pursue his lifelong dream. What he wasn't expecting was the feisty sister of one of his battle buddies—who has made it obvious that she wants nothing to do with him—to intrigue him in a way no woman has before.
Reagan Hudson's life changed in the blink of an eye six years ago when she found out she was pregnant and on her own. Since then, Reagan has vowed never to let another man into her life so that no one can walk out on her, or her son, again. But the more she runs into her brother's hot and mysterious friend, the more he sparks something in her that she promised herself she wouldn't feel again.
Can two people with everything to lose allow themselves to finally capture the love they both deserve?

Capturing Peace by Molly McAdams really surprised me. It’s a novella, which I generally avoid because I think they have a tendency to feel rushed. This one didn’t, though. Even though it came in at under 200 pages, I felt like I really got a sense of Reagan and Coen. Even the side characters felt fully fleshed out.

I liked Reagan overall, but she frustrated me sometimes. She was so determined to do everything on her own and not let anyone into her and her son’s life that she came really close to being one-note. McAdams straddled that line, though. Even though I didn’t always agree with the decisions Reagan made, I saw her reasoning behind it. Her ex, Parker’s father, took off when she found out she was pregnant. Yes, that was a dick move. I don’t like the guy, we’re not really supposed to. But they were both in high school. High school kids aren’t known for making the best decisions. I fault his parents every bit as much as I fault him for not forcing him to step up and at least help Reagan out. But because of this, Reagan is determined to do everything herself. She accepts day care help from her parents, but that’s it. And that’s as much so they can spend time with their grandson as it is to help herself out. And, man, Reagan did a much better job than I did not telling her family to go screw themselves with the constant fix-up attempts. I understand that they love her and want her and Parker to be happy, but they were constantly blindsiding her with dates and getting on her about finding someone. She continually told them to cut it out, but they didn’t seem to get the message.

Coen had a lot going on, too. I don’t know if the timing for him to get into a relationship was exactly right, just after coming back from deployment, though. There was a lot he needed to deal with and wasn’t dealing with. PTSD, survivor’s guilt, general transitioning-to-civilian life. But being with Reagan seemed to help, so what do I know. I thought his freak-out felt a little contrived and out of character, but that was the only real complaint I would have. He was so solid the entire time it seemed to come out of left field.

This was a heartwarming story, with characters who were even better together than they were individually. They brought out the best in each other, and were there for each other in a way neither had experienced before. I haven’t read anything by Molly McAdams before, but the next book in the series, focusing on one of Coen’s friends from the military, sounds so good. I can’t wait to check that one out, too.

Molly grew up in California but now lives in the oh-so-amazing state of Texas with her husband, daughter, and fur babies. When she’s not diving into the world of her characters, some of her hobbies include hiking, snowboarding, traveling, and long walks on the beach … which roughly translates to being a homebody with her hubby and dishing out movie quotes. She has a weakness for crude-humored movies and fried pickles, and loves curling up in a fluffy comforter during a thunderstorm … or under one in a bathtub if there are tornados. That way she can pretend they aren’t really happening. 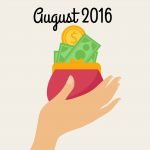