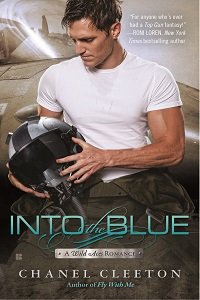 From the author of Fly with Me and the Capital Confessions Novels comes the newest in the sexy Wild Aces Romance series.
Eric Jansen—call sign Thor—loves nothing more than pushing his F-16 to the limit. Returning home to South Carolina after a tragic loss, he hopes to fix the mistake he made long ago, when he chose the Air Force over his fiancée.
Becca Madison isn’t quick to welcome Thor back. She can’t forget how he shattered her heart. But Thor won’t give up once he’s set his sights on what he wants—and he wants Becca.
Thor shows Becca that he’s no longer the impulsive boy he used to be, and Becca finds herself irresistibly drawn to him. But will Thor be able to walk away from his dream of flying the F-16 for their love or does his heart belong to the sky?

This series is so good. Chanel Cleeton has managed to take a really intense, heavy subject, and give it the gravity it deserves without turning the book into a slog.

We’re back with the Wild Aces. This time the focus is on Eric Jensen, call sign Thor. We met him briefly in Fly With Me but didn’t get a lot of his backstory. Here we find out that when he joined the Air Force ten years ago, he left behind a Dear Jane letter for his fiancee. They’d started fighting when he joined the military, and hadn’t ever really recovered. She was on her way to being an attorney, and staying with Eric meant giving up on the future they’d envisioned for themselves, and the future she’s envisioned for herself. The military means assignments all over the world, months and months apart, missed holidays, missed events, never being able to settle in one place without the knowledge that you can be uprooted and reassigned at any moment. And Becca certainly wouldn’t be able to be an attorney under those circumstances.

Even though Eric and Becca had been fighting a lot about their future before he left, she hadn’t thought he’d ever leave the way he did, sneaking away and leaving behind a note. It’s been ten years, and she’s moved on in some ways, not so much in others. She’s dated, obviously, but hasn’t ever really gotten over Eric. It’s been a little easier on her because he’s never once come back to town since he left, but people in small towns have long memories, and she’s often reminded of him. When they randomly run into each other in a club in Vegas, she’s none too pleased.

This is a second chance romance, so the emotional development felt real. The relationship developed quickly, unlike the previous book in this series, most of this one takes place in a short amount of time, but it’s not surprising that the feelings Becca and Eric have always shared are still there, just lying dormant. Their connection is still there. But so are the issues. Eric is still in the Air Force. His time is almost up, and he’ll have to decide if he wants to re-sign or leave the Air Force. Flying is the only thing he knows, the only career he’s had. He didn’t go to college, and he’s never even considered leaving the Air Force. But now Becca is back in his life, and her circumstances haven’t changed, either. She knows, like Jenna did in Fly With Me, that if she chooses to stay with Eric and he stays in the Air Force, all the sacrifices will be hers. She’ll have to give up her career, she’ll have to leave her hometown and her friends, she’ll have to give up the dreams she has of a big family and Christmas mornings and weekends lying in bed. Family is everything to her because she didn’t have much of one growing up. She’ll have to give up her career and choose Eric, knowing Eric can never do the same.

Eric, for his part, refused to lie to her or bullshit her. He has about a year left, a year that will include a deployment, before he can leave. Even if he decides to leave, he’s going to extend his service for a few months to help train new instructor pilots. He can’t do anything to change that. His offer to date long-distance isn’t anything Becca wants to hear. They were together for five years before they got engaged. Going back to casual dating, even exclusive dating, is a step backward, and not one she’s interested in taking. If they’re going to do this, she wants to do it all the way. Otherwise she doesn’t see the point.

There’s so much genuine emotion in these books. Chanel Cleeton has a way of getting right to the heart of the matter and presenting it in such a way that your heart breaks for both of them. Eric’s not wrong – being a fighter pilot is all he’s ever known, and if he’s not in the military he doesn’t know who or what he is. He doesn’t really have anything to fall back on. But Becca’s not wrong, either. She’ll have to give up everything and know that she’s not going to get the same in return. She, and any kids they have, will have to come in second to the military, and that’s not something everyone can live with.

I love romance novels that make me question how it’s all going to lead to an HEA. It’s a romance novel, so I know it’s going to work out, but I can’t see a way for it to happen without someone having to make themselves miserable in the process. Chanel Cleeton is a new author to me, but she’s someone I’ve come to trust to make it work out. Easy’s book is up next, and wow. I cannot wait to get my hands on that one. The complications I expect in that book, are, again, so real, and so heartbreaking. Do yourself a favor and read this series.