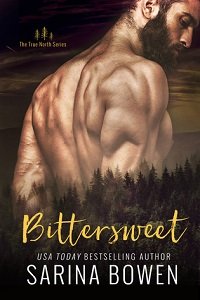 The new series is set in Vermont. True North is populated by the tough, outdoorsy mountain men that populate the Green Mountain State. They raise cows and they grow apples. They chop a lot of wood, especially when they need to blow off steam. (Beards are optional but encouraged.)
If you can’t stand the heat, get out of the orchard.
The last person Griffin Shipley expects to find stuck in a ditch on his Vermont country road is his ex-hookup. Five years ago they’d shared a couple of steamy nights together. But that was a lifetime ago.
At twenty-seven, Griff is now the accidental patriarch of his family farm. Even his enormous shoulders feel the strain of supporting his mother, three siblings and a dotty grandfather. He doesn’t have time for the sorority girl who’s shown up expecting to buy his harvest at half price.
Vermont was never in Audrey Kidder’s travel plans. Neither was Griff Shipley. But she needs a second chance with the restaurant conglomerate employing her. Okay—a fifth chance. And no self-righteous lumbersexual farmer will stand in her way.
They’re adversaries. They want entirely different things from life. Too bad their sexual chemistry is as hot as Audrey’s top secret enchilada sauce, and then some.

Sarina Bowen had me with “self-righteous lumbersexual farmer”. Once I saw that in the description, I had to read this book. Add in “grumpy” and I was ready to swoon before I even turned on my Kindle.

Griff Shipley and Audrey Kidder had a few hookups in college, but it didn’t go any further than that. Griff had genuine feelings for her, but Audrey was getting out of a crappy relationship and wasn’t ready for it, so she ghosted. Then she failed out of college and moved, so they lost touch until reconnecting in the beginning of this book.

Audrey is a culinary-school educated chef who works for a restaurant corporation that treats her like an unpaid intern. I don’t think they pay her much better than that, either. They’ve tasked her with driving around Vermont trying to convince farmers to sell their crops to the corporation at insultingly low prices. In the off season. After they’ve already tried and been turned down. When she fails, it’s her fault and they condemn her and threaten to fire her. When she succeeds, they renege on the deal and leave her hanging.

Griffin’s life hasn’t gone according to plan, either. He went to college on a football scholarship, but a bum knee and his dad’s sudden death ended any potential football career and sent him home to run his family’s apple farm. He loves his family and he loves his farm, but he can’t deny that he’s the smallest bit bitter about the path his life has taken. Especially when the farm is struggling and he doesn’t know how much longer he’s going to be able to keep it going. He’s trying to use the apples to take advantage of the current cider craze, but it takes time and money and equipment that he doesn’t have. There’s a chance that Audrey’s offer could help, but only a chance, and not at the prices she’s offering.

This was story of second chance love, two people whose lives are firmly cemented in different worlds trying to find a way to combine them. Griff can’t and won’t leave his farm and his family. Audrey loves being a chef, and she certainly can’t do that on Griff’s family farm, as much as she loves it and everyone there. She worked hard to get through culinary school, defying her mother and everyone else who constantly told her that she was too flighty to get through it or accomplish anything. She hates her job, hates working for this soulless corporation, but she knows that if she sticks it out, she’ll have a chance of getting a job in an actual kitchen in their Boston restaurant.

Griff and Audrey were scorching hot. The chemistry they’d had in college hasn’t lessened at all, and they’re able to pick up right where they left off. Griff is starting to feel trapped, Audrey has been told her whole life that she’s useless and an embarrassment and these two needed each other so badly. Audrey needed not just Griff, but his whole family, all of whom rallied around her and did what they could to build her confidence. A solution to the completely-different-lives problem began to present itself, but I didn’t know if these two were going to get there. Both of them were so used to taking care of themselves and shouldering every burden that it just didn’t occur to them to share. There was a lot of changing and accepting that would have to happen for them to get together.

The only reason I didn’t go a full five stars is that the beginnng draggd for me a little bit. There was a lot of setup before the story really got started. But I loved this book. I pre-ordered the next one right away, and I can’t wait until it comes out on 7/12. It’s the story of a character we meet in this book who isn’t one of Griff’s family members, but I really hope we get to see some more of the Shipleys. I loved the entire community Sarina Bowen created here. I haven’t read very many of her books, but every time I do, I want to read more. She’s so good at writing realistic, complicated relationships with real human beings, not just walking stick figures. And sex. She’s really, really good at writing sex.