Between a Rock and a Hot Mess by Phyllis Bourne
Series: The Sinclair Brides #1
Series Rating:

Riley Sinclair has man problems. Trouble is, everyone has one but her.

After years on the sidelines at weddings, the head of Sinclair Construction now sits home alone on what used to be girl’s night. Her only companions are television, a bottle of wine and a crush on a stranger she doesn’t have the guts to approach. Too bad she isn’t more like the daring heroine of her favorite show Hot Mess. Men want to bed and wed the glamorous Delilah Cole, while rough-around-the-edges Riley is relegated to the friend zone.

Enter the perfect solution - an interactive app where the star of Hot Mess dishes style, beauty and relationship advice guaranteed to transform any woman into a man magnet. Riley re-invents herself, and thanks to the app, is on the brink of landing her dream man…and another she didn’t count on. Soon Riley’s embroiled in her own hot mess and has to choose between the Cinderella fairytale with the man she wants or the soul deep passion found only in the arms of the man she needs.

This book was adorable! My friend Trisha has been recommending it to me for about 2 years now, and I finally got around to it, and now I’m sorry I waiting so long. Fortunately, there’s at least one more book currently out in the series, so I can get to it right away.

Riley Sinclair runs a construction company, and by all accounts, she’s great at it. She’s completely secure in who she is, more comfortable in her overalls and work boots than in heels and dresses, really good at softball, and basically someone I want to hang out and drink wine with.

Hudson Parker runs a rival construction company but is secure enough in his company and in himself to not be threatened by Riley. He loves that she’s as competitive as she is, in fact, it’s one of his favorite things about her. But they hate each other, so obviously there won’t be any shenanigans. Obviously. Besides, Riley certainly isn’t interested in Hudson. She has her eye on a guy who works across the street from one of her job sites. She’s never actually spoken to him, but she sees him every day as he leaves his office. And despite never having talked to him, she just knows they’re perfect together. If only she could bring herself to approach him.

One canceled girls night and a bottle of wine later,I she downloads a lifestyle app that guarantees to help her win the heart of any man she chooses. Fashion advice, dating tips, beauty tutorials, all of it. I liked the setup a lot. Riley used the app’s advice to update her wardrobe and her makeup but didn’t let it turn her into someone completely new. She switched out her old work boots and tools for some pink ones but didn’t start showing up on job sites wearing heels or full makeup. And she took a minimum amount of shit from the guys on her projects, too, but no one seemed to think too much about it.

But Hudson noticed. And so did Ian, which turned out to be the perfect guy’s name. Riley did manage to connect with him, though unfortunately for her, it happened around the same time that she and Hudson started to think that there might be more to their sniping than mere hatred.

Some of the antics Riley and Hudson got into before they got their HEA had me genuinely laughing, which is rare for me. Once Hudson decided he wanted Riley, he wasn’t going to stop at anything until he got her, and he went out of his way to make sure he planned dates and activities that would show Riley exactly why they were perfect together. He was so sweet and hot and perfect for Riley. Watching these two get past their enmity and fall in love with each other was a treat.

I also really liked the relationship between Riley and her two best friends. Riley’s sister, and their friend Plum were inseparable. I love a good girl group, and these three certainly qualified. I know that Hope is getting a book, and I’m going to pick that one up, too. I don’t know about Plum, but if she gets a book I’ll be all over it. If you’re looking for a quick read, something light and adorable and still hot, you should do yourself a favor and pick this one up.

A nominee for Romance Writer’s of America’s RITA® award, she has also been nominated for an RT BOOKReviews Reviewer’s Choice Award and won Georgia Romance Writer’s prestigious Maggie Award of Excellence.

She lives in Nashville with an understanding husband, who in one kiss can discern the difference between department store and drug store lip gloss. When she’s not at the computer, Phyllis can be found at a cosmetics counter spending the grocery money.

Mini-Review – Melting Into You by Laura Trentham
Top Ten Tuesday: Books I Love But Will Never Re-Read 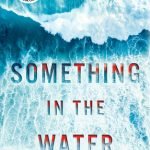 Review – Something in the Water by Catherine Steadman