Posted May 20, 2015 by smutmatters in Contemporary, Reviews / 0 Comments 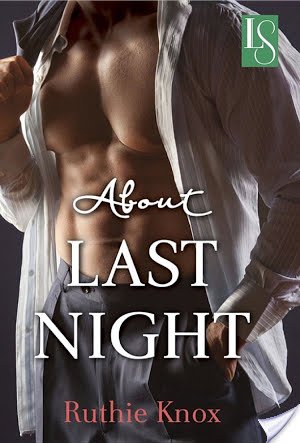 Cath Talarico knows a mistake when she makes it, and God knows she's made her share. So many, in fact, that this Chicago girl knows London is her last, best shot at starting over. But bad habits are hard to break, and soon Cath finds herself back where she has vowed never to go...in the bed of a man who is all kinds of wrong: too rich, too classy, too uptight for a free-spirited troublemaker like her.Nev Chamberlain feels trapped and miserable in his family's banking empire. But beneath his pinstripes is an artist and bohemian struggling to break free and lose control. Mary Catherine-even her name turns him on-with her tattoos, her secrets, and her gamine, sex-starved body, unleashes all kinds of fantasies.When blue blood mixes with bad blood, can a couple that is definitely wrong for each other ever be perfectly right? And with a little luck and a lot of love, can they make last night last a lifetime?

Cath Talarico has made a lot of mistakes in her life. So many, she’s imposed a whole bunch of rules on herself, making herself over into Cath 2.0 in order to avoid making more of them. No more one-night stands is definitely on that list. In fact, right now, that rule is expanded to no men, period.

Neville Chamberlain (yes, he’s named after that prime minister) struggles to do what his family expects him to do. He’s gone to work in the family’s bank and hates every minute of it. He’s an artist at heart, and the corporate world is entirely too confining.

These are two screwed up people. Cath came from nothing and her back story is tragic, if a little too much so. Nev grew up with every advantage, the child of a ridiculously wealthy couple who demanded perfection and refused to allow him to pursue his art dream. Written out like that, Nev’s damage doesn’t seem so bad. He clearly has some self-esteem issues, but that’s about it. He’s trapped and miserable in his current job, but, really, he could fix that at any time by just telling his family to screw themselves and quitting.

Cath and Nev already have a passing acquaintance – they ride the same train several days a week. Cath doesn’t know his name, but she calls him CITY (in all caps) because to her, everything about him screams that he works in the City of London, which is the square mile financial district in the center of London. He doesn’t have a cute nickname for her, but he’s definitely noticed her. They don’t have any interaction until late one night, when a combination of a terrible date, antihistamines and alcohol leave Cath stumbling around, too inebriated to get herself home. She refuses to tell him her name or where she lives, and he’s not going to leave her alone in her condition, so he takes her to his apartment. Their chemistry is apparent almost immediately after she wakes up. It may have been apparent that night, but she was too drunk for it to count.

But once she’s awake, these two are on fire. And it doesn’t relent for the rest of the book. I loved this book. This is actually the second time I’ve read it, and outside of Harry Potter, and A Song of Ice and Fire, I rarely reread. Nev was so patient with Cath, way past the point I would have been. She’s created so many rules to avoid getting hurt, yes, but also to avoid hurting other people. She sees herself as this force, ripping through people’s lives and leaving disaster in her wake. So she tries to keep herself completely disconnected from Nev, her boss, her roommate, and everyone else in her life. She won’t spend the night with Nev. She won’t talk about her past or ask Nev about his. Sex, and only sex. She’ll show up at his apartment at two in the morning, have mind-blowing sex that would leave most people unable to walk or form a coherent thought, and immediately get up and leave. She won’t tell him where she lives, where she works, or her last name. Nev takes all of this in stride, trying to lightly push Cath at times and get her to open up, but content to live by her rules most of the time.

Progress followed by distance. It was the only way she could handle intimacy.

Cath’s tattoos are a major plot point in this story. They were each designed very specifically to remind her about a mistake she made in her past, tangible reminders of all the ways she has screwed up and what the consequences are if she lets herself forget her new rules and why she tries to live by them. Obviously she won’t tell Nev anything about them, until she throws the stories in his face after a disastrous weekend with his parents. The stories behind each of the tattoos are so personal and so heartbreaking individually, but when they’re all just coming at him like that, he can’t even react. She leaves, getting on a bus and going home and leaving him behind.

Nev’s family was one of the weaker parts of the story for me. They were all fairly cliched. His brother, Winston, is a pretty typical villainous creep. He has no problem leering at Cath when she leaves Nev’s place one morning, but he does nothing but insult her and call her trash every time Nev mentions her. Their mother is an over-bearing shrew who doesn’t care about her money and status and won’t abide anything that could threaten either of those things, even her own children. The scheme these two come up with to force Nev to take a bigger role in the bank was fairly ludicrous in today’s world. Nev’s father is a decent guy, but allows himself to be completely overrun by his wife.

That terrible weekend with Nev’s family is what leads into the big separation. Cath is convinced that she and Nev have no chance together. She cuts him out completely, refusing to see him or speak to him, throwing herself into her work. She works at the Victoria and Albert museum, currently working on a knitting exhibit. The exhibit is losing its funding, and after she and Nev break up, she comes up with a way for them to get the funding without depending on donations. It’s a great idea and it works like a charm. She misses Nev as much as you would think she did, but I was happy she had something else to focus on. Nev was miserable, but to his credit, he respected her wishes and left her alone.

The end of this book is where it goes off the rails for me. I hate, hate, hate how Nev won Cath back. I hate everything about it. I really hate that she let him get away with it. He finally decides to follow his heart, quit the bank, and be an artist. Wonderful. His family, shamed by how they treated Cath and ready to make amends rather than lose Nev altogether, are completely behind them. View Spoiler »He has a lot of paintings ready for his first show, and with his family connections, it’s going to be huge. Cath is tricked by her boss into attending the exhibit, and when she walks in, she she’s that the centerpiece of the show is five huge paintings. Of her. Completely nude, her face included. They’re good enough and clear enough that as soon as she walks in the room, everyone starts pointing her out as the woman in the paintings. Each of the paintings prominently features one of her tattoos, one of her mistakes, and in the background, Nev has painted its story. All of them. All of the mistakes Cath feels she has made is on full display along with her face and body. “I didn’t ask you to sign a release.” “I would have said no.” “Precisely.” So you knew she wouldn’t want this, but you did it anyway, Nev? This is horrible. I hate it so much. One of the things Cath said to him when she was telling him the stories of her tattoos, after he protested when she took off her shirt in public to do so, was “My body, Nev. I can take off my shirt whenever the hell I please.” She seems to forget this when confronted with the paintings at Nev’s show. « Hide Spoiler

The end of this book spoiled what had been a great read for me up to that point. This is the only Ruthie Knox book I’ve read, though I have several in Mt. TBR. If they’re all this good, I’m looking forward to them. I just hope the ending of this one was an aberration.

Ruthie Knox writes contemporary romance that’s sexy, witty, and angsty—sometimes all three at once. After training to be a British historian, she became an academic editor instead. Then she got really deeply into knitting, as one does, followed by motherhood and romance novel writing.