So with no further ado, here’s my book tracking for April:

Also – No, you’re not seeing things. I don’t track pre-orders very well, so I managed to pre-order JR Ward’s The Beast in both e-book form and in hardback.

Ok, guys. I think I have a problem. I’ve never put this out in black and white before, and it’s really startling. I seem to just buy books without giving any thought to whether or not I’ll be able to read it ever, much less any time soon. So for May, I’m going to try to be more aware of what I’m doing. I’ve committed to reading all or at least mostly ARCs in May for the Clean Sweep May 2016 challenge anyway, so I’m going to try to stick with those and spend a lot less money. Obviously, my Audible membership is a monthly charge, and I’m certainly not going to cancel any pre-orders, but I have to curb this a little bit. I don’t have time to read all these books!

A Curious Beginning by Deanna Raybourn  $4.23

The Sleeper and the Spindle by Neil Gaiman  $4.89

Far From True by Linwood Barclay $4.99

You’re Never Weird on the Internet (Almost) by Felicia Day $17.12

Beauty and the Blacksmith by Tessa Dare

Crazy for the Competition by Cindy Madsen $1.06 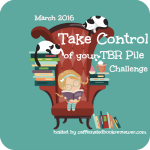 One response to “How Much Do I Spend On Books?”