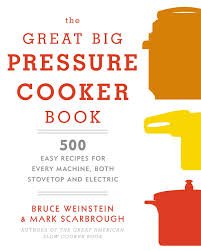 The old-fashioned pressure cooker has been rediscovered by modern home cooks, both for its quick-cooking powers (dried beans are perfectly soft in 35 minutes; risottos are tender in 20 minutes) and for its ability to infuse foods with intense flavor (carrots become sweeter, meat more savory). The Great Big Pressure Cooker Book has recipes for every device, stovetop and electric, no matter the manufacturer. Whether you're seeking an adventurous array of spices, found in dishes such as Cherry Chipotle Pulled Chicken or Smashed Sweet Potatoes with Pineapple and Ginger, or pure comfort food, like French Toast Bread Pudding or Classic Pot Roast and Potatoes, you'll find the perfect recipe--each labeled by level of ease--to feed your family. This is the only pressure cooker book you'll ever need.

I probably won’t review too many cookbooks, but I got this one last week and I just had to. I got an Instant Pot for Christmas this year, and since I’ve never had a pressure cooker before, I had no idea what to do with it. The Instant Pot website is good, there are a lot of recipes and advice, and the Facebook group is one of the most active I’ve ever seen, but I was getting my recipes in dribs and drabs. Enter The Great Big Pressure Cooker Book.

This book was great. The first section is an easy to read breakdown of the history of the pressure cooker, the different types of modern pressure cookers, and some general tips on how to use them.  There are 500 recipes in here, and every one of them uses easy to recognize, easy to find ingredients. Of the 500, I probably marked 300 I want to try out. I probably won’t actually make all 300, but they were the ones that grabbed my attention on my first go through. Each recipe includes the usual parts (ingredients, time, and instructions), but also the expected level of effort, servings, what level pressure to use, and the type of pressure release to use.

The only two minor quibbles I’d have with this book are the lack of pictures and the format. I love pictures in cookbooks. This one had a ten-page section in the middle with pics of about 30 of the recipes, and that’s it. I wouldn’t expect pics of all 500 recipes, but more that 30 would have been great. I’d also prefer it to be spiral-bound, but I think all cookbooks should be spiral-bound. It’s just so much easier to deal with in the kitchen.

So that’s it – my quickie cookbook review. If you have a pressure cooker, do yourself a favor and grab this one up.

About Bruce Weinstein and Mark Scarbrough

Bruce Weinstein is the chef in our duo. A life-long New Yorker, he wanted to leave the city–so we now live in rural New England. Don’t ask. He can rip through Chopin Nocturnes, knits whenever he’s not cooking, and is quick to ask “Who’s up for a cocktail?” He went to “Fame” for high school, took off for chef school, and put in his time at Manhattan advertising firms. He loves Modigliani, is indifferent to Picasso, and has been forced to sit through more post-modern, avant-garde music than anyone should. His patience is boundless–except when it comes to bridge.

Mark Scarbrough is the writer. A former academic, he’s sometimes snarky because he’s ridiculously innocent in the marrow. He reads Dante for fun and hangs out in art museums on sunny afternoons. He’s a bemused Texan in snow drifts, a dumbfounded progressive, and a self-confessed culinary snob. He still teaches literature on the side and leads raucous book groups at Connecticut libraries. (You can find out more about one of those groups here.)

Together, we’ve written a shelf of cookbooks. We also pen a column called “Sundays in the Kitchen with Bruce and Mark” on weightwatchers.com. To put it bluntly, Bruce is olive oil; Mark, butter. Bruce wants a Christmas tree; Mark writes the haggadah for Passover. (It makes for interesting times.) We’ve contributed to most of the big food magazines and have been guests on many of the national morning shows.