Max Hilton is my high school nemesis turned billionaire. And tomorrow I deliver his lunch order. In a cat costume.

You know he’s going to love it. He’ll smile that smirky smile, sitting there all superior in his gleaming tower, the wealthiest and most notorious playboy in all of New York, the king of everything.

Turns out it wasn’t curiosity that killed the cat—it was mortification.

I’m almost ready to quit my lunch delivery job, but then my roommate tosses me a copy of The Max Hilton Playbook: Ten Golden Rules for Picking up the Hottest Girl in the Room.

It’s the book that catapulted him to stardom. And it’s my new bible.

I’m going to use his own techniques against him. I’ll wrap him around my little finger, bring him to his knees, and crush his steely heart. Call it payback for all the single girls who had to endure legions of losers wielding his legendary tactics.

But seeing Max every day, I’m discovering a side of himI didn’t even know existed--he’s not the jerky guy I thought he was. He hasthis smile he shows only to me, and it melts my heart. His touch sends shiversdown my spine. And those forbidden kisses are driving me wild.

Falling for him was not in my plan.

Am I breaking his rules or will his rules break me first? 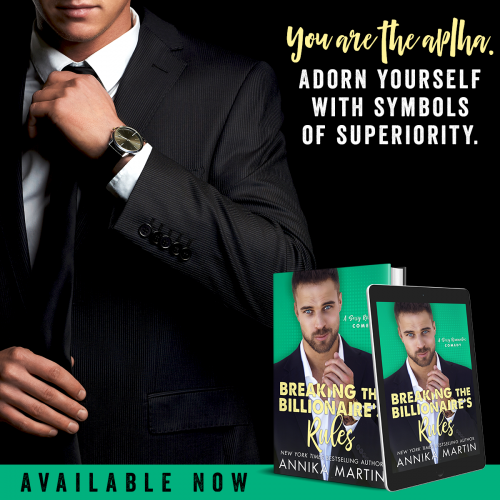 Just a few pages into this, I wasn’t sure if I was going to be able to finish it. I was cringing so hard for Mia. Every interaction between her and Max was so difficult to watch. I mean… I don’t know about you, but I wasn’t very popular in high school. I wasn’t exactly bullied, I was mainly ignored, but there were certainly boys I had crushes on, and boys I embarrassed myself in front of, and boys I never wanted to see again for fear of embarrassing myself in front of again.

All of that was brought to a head for Mia, when she discovers that her high school nemesis, Max Hilton, has specifically requested that she be the one to deliver his lunches from now on. (She works for a delivery shop, it makes sense in the book.) Not only does she have to deliver and serve him his lunch every day, but she has to do it while wearing a cat suit, which is the uniform for Meow Squad, the delivery company.

Guys, I really didn’t know if I would make it through this book. Mia tried so hard to act like Max wasn’t getting to her, and every day, she’d almost make it out before he’d say or do something to completely cut her down, and my heart was breaking. I really didn’t know if Annika Martin was going to be able to make me like Max by the end of this book. But oh, boy, did she. Before this book ended, I found myself just as gutted for Max as I had been for Mia earlier. The groveling is real, and it was beautiful to see.

The titular rules refer to a book Max wrote when he was 20 or 21. Based on the quotes that head each chapter and the snippets we hear Mia and her friends reading, it’s your standard pickup-artist bullshit. It’s so bad, and it’s so hard to believe men act like this, but they do. And eventually Max is forced to reckon with what he brought into the world when he wrote that book. I loved it.

This book is told in first-person, and the chapters eventually alternate between Max & Mia, but not until later. The entire first half is in Mia’s POV, which I’m sure contributed to how much I disliked Max early on. It looks like it’s part of a series, but it reads just fine as a standalone. I assume some of these characters are from previous books, but it didn’t have any bearing on this story. I don’t want to say more, because I think you should read this book without delay.

I also enjoy hanging out in coffee shops with my awesome writer husband.

I’ve worked a surprisingly large number of waitressing jobs, and have also worked in a plastics factory and the advertising trenches.

My garden is total bee-friendly madness. I also write as RITA-Award-winning Carolyn Crane.