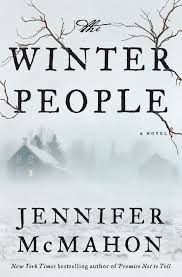 The New York Times bestselling author of Promise Not to Tell returns with a simmering literary thriller about ghostly secrets, dark choices, and the unbreakable bond between mothers and daughters . . . sometimes too unbreakable.
West Hall, Vermont, has always been a town of strange disappearances and old legends. The most mysterious is that of Sara Harrison Shea, who, in 1908, was found dead in the field behind her house just months after the tragic death of her daughter, Gertie. Now, in present day, nineteen-year-old Ruthie lives in Sara's farmhouse with her mother, Alice, and her younger sister, Fawn. Alice has always insisted that they live off the grid, a decision that suddenly proves perilous when Ruthie wakes up one morning to find that Alice has vanished without a trace. Searching for clues, she is startled to find a copy of Sara Harrison Shea's diary hidden beneath the floorboards of her mother's bedroom. As Ruthie gets sucked deeper into the mystery of Sara's fate, she discovers that she's not the only person who's desperately looking for someone that they've lost. But she may be the only one who can stop history from repeating itself.

Obviously, this book is not smut. But, wow. It was so good! I really like Jennifer McMahon. I just started reading her a couple of years ago, but I’m working my way through her back list.

The Winter People is told in alternating voices and alternating timelines. Sara Harrison-Shea and her husband Martin both have segments in the earlier timeline; mostly in 1908 with a few a little later. Nineteen year old Ruthie and a woman named Catherine take turns with the present day sections. I was torn how to categorize this book at first, but I would say the present day sections are a mystery, while the sections from 1908 are more supernatural, ghost story, horror book. Present-day Ruthie’s mother, Alice, has gone missing, and while Ruthie is trying to find her, Catherine is mourning the loss of both her husband and her son. Their stories intersect in an unexpected way, and they all intersect with the story of Sara Harrison-Shea, which Ruthie and Catherine are getting from Sara’s newly discovered diary.

I don’t really want to give away any more than is already in the synopsis. This book really depends on not knowing what’s coming next. This is a great time of year for it, too. When I was listening to a big chunk of it, it was storming outside, and the wind was howling, and having this creepy story directly in my ears with my earbuds really added a lot to the experience.

The narration of this book was wonderful. It’s narrated by two different women, Cassandra Campbell, and Kathe Mazur. Unfortunately, I don’t know which of them narrated the present day story and which narrated the story from the past, but they were both excellent. Their voices were similar, but whichever of them narrated Sara Harrison-Shea’s voice in the past was phenomenal. It really added to my experience listening to this book. If you have time in your audio book schedule, do yourself a favor and pick this one up.

I was born in 1968 and grew up in my grandmother’s house in suburban Connecticut, where I was convinced a ghost named Virgil lived in the attic. I wrote my first short story in third grade. I graduated with a BA from Goddard College in 1991 and then studied poetry for a year in the MFA in Writing Program at Vermont College. A poem turned into a story, which turned into a novel, and I decided to take some time to think about whether I wanted to write poetry or fiction. After bouncing around the country, I wound up back in Vermont, living in a cabin with no electricity, running water, or phone with my partner, Drea, while we built our own house. Over the years, I have been a house painter, farm worker, paste-up artist, Easter Bunny, pizza delivery person, homeless shelter staff member, and counselor for adults and kids with mental illness — I quit my last real job in 2000 to work on writing full time. In 2004, I gave birth to our daughter, Zella. These days, we’re living in an old Victorian in Montpelier, Vermont. Some neighbors think it looks like the Addams family house, which brings me immense pleasure.