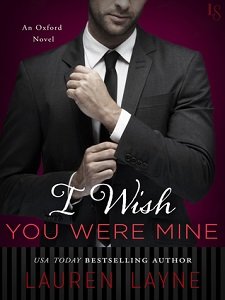 I Wish You Were Mine by Lauren Layne
Narrator: Lucy Malone
Series: Oxford #2
Series Rating:

Perfect for fans of Alice Clayton and Emma Chase, Lauren Layne’s Oxford series heats up in this story of forbidden desire as a brooding jock hoping for a comeback falls for a woman who’s strictly off-limits.
A year ago, Jackson Burke was married to the love of his life and playing quarterback for the Texas Redhawks. Now he’s retired, courtesy of the car accident that ruined his career—and single, after a nasty scandal torpedoed his marriage. Just as he’s starting to get used to his new life as a health and fitness columnist for Oxford magazine, his unpredictable ex shows up on his doorstep in Manhattan. Jackson should be thrilled. But he can’t stop thinking about the one person who’s always been there for him, the one girl he could never have: her younger sister.
Mollie Carrington can’t say no to Madison. After all, her older sister practically raised her. So when Madison begs for help in winning her ex-husband back, Mollie’s just glad she got over her own crush on Jackson ages ago—or so she thought. Because as Mollie reconnects with Jackson, she quickly forgets all her reasons to stay loyal to her sister. Tempted by Jackson’s mellow drawl and cowboy good looks, Mollie is sick and tired of coming in second place. But she can’t win if she doesn’t play the game.

I’m just going to say it. I didn’t like Jackson Burke. I felt bad for him; he lost everything, instantly, because of the actions of someone else. He had every right to be depressed and lost. His wife turned out to be a pretty horrible person, but apparently he’d known that for a long time, and they didn’t have any kids or anything, so I’m not clear on why they stayed together. He caught her cheating on him once, and knew she cheated on him all through their marriage. So, again, it doesn’t make sense that he stayed married to her.

I really liked Alex Cassidy sitting Jackson down and telling him that he was acting like a diva. Jackson constantly rebuffed everyone’s friendship advances while bemoaning New York for being a lonely city. He missed Texas, and wanted to go back, and was so focused on the life he’d lost, he wasn’t even bothering to try to make a new life. He was trying to get an assistant coaching job with his former team, but the head coach didn’t want to give him a job until Jackson could clean up his reputation. And that’s another thing. Jackson’s ex-wife, in an attempt to head off any nasty cheating rumors about her, paid a dozen or so women to come forward and say that they had slept with Jackson while he and Madison were married. I have a really hard time believing that the NFL, of all organizations, wouldn’t hire Jackson because he has a reputation as a cheater. The NFL has unapologetically hired child molesters, rapists, domestic abusers, dog fighters, murderers, thieves, and I don’t even know what else. I have a really tough time accepting that cheating spouses is the line they won’t cross. If Jackson’s former coach really thought he was the person for the job, he would have had the job. There shouldn’t have been any reason for “that pretty wife of yours” to go to the coach and convince him that she was at fault and Jackson should get the job.

Jackson is pretty adamant the entire book about his feelings for Madison, his ex. And those feelings were pretty negative. He really, really didn’t like Madison, and after reading everything she put him through during their marriage, I couldn’t really blame him. But then for no real reason, he spilled all his secrets to her about halfway through. Secrets he hadn’t told Mollie or anyone else. And for some reason, it never occurred to him that the woman he’d repeatedly called manipulative and scheming would use the information to manipulate and scheme. He was completely blindsided when it happened.

Mollie was apparently smart, but I didn’t see a lot of it. Jackson didn’t exactly treat her badly, but he made sure to keep her at arm’s length, even when they were sleeping together. Her sister was clearly manipulating everything and everyone around her, but Mollie just didn’t see it.

The setup for the book was…. Hm. I wasn’t sure how Lauren Layne was going to pull it off. Ending up with your late sibling’s spouse is one thing. Ending up with their ex, is a whole other can of worms. There are some relationships that are just off limits. But I ended up being more ok with it than I thought I would. Two wrongs don’t make a right, but I felt like Madison violated the sibling code a lot earlier than Mollie did, and once that code has been set aside, no one can enforce it. Madison’s cheating on Jackson didn’t have anything to do with it, but when Madison slept with Mollie’s boyfriend, just because, and lied to Mollie about it, and spent their entire adult lives lying and manipulating Mollie and putting her down and making her feel inadequate, she lost any built-in sibling code protection. In my opinion, anyway. If she wasn’t going to treat Mollie like a sibling, then I didn’t think Mollie had any obligation, either.

And when Jackson finally realized what he wanted from his life, and went back to New York to get Mollie back, he did not give sufficient grovel. I need good grovel from whoever screws up. Jackson screwed up badly, and walking into Mollie’s room, taking her clothes out boxes and hanging them in a closet without a word wasn’t good grovel. I was waiting for Mollie to call him out on it, and she finally did. I needed more backbone from Mollie through the book. She had her moments, but she was so determined to keep her rose colored glasses that she refused to see what was right in front of her eyes. And as a result people walked all over her.

I liked seeing the glimpses of the other couples from the previous books, especially Cole and Penelope, who are a favorite of mine. My desire to read Lincoln’s book was whetted even more, and I cannot wait for that one. And I didn’t hate this one, but it wasn’t my favorite Lauren Layne book.