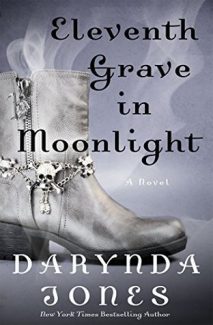 A typical day in the life of Charley Davidson involves cheating husbands, missing people, errant wives, philandering business owners, and oh yeah...demons, hell hounds, evil gods, and dead people. Lots and lots of dead people. As a part time Private Investigator and full-time Grim Reaper, Charley has to balance the good, the bad, the undead, and those who want her dead. In this eleventh installment, Charley is learning to make peace with the fact that she is a goddess with all kinds of power and that her own daughter has been born to save the world from total destruction. But the forces of hell are determined to see Charley banished forever to the darkest corners of another dimension. With the son of Satan himself as her husband and world-rocking lover, maybe Charley can find a way to have her happily ever after after all.

I have a deep, dark secret about this series, you guys. I’ve never told anyone this before, but… Here we go. I do NOT like Reyes Alexander Farrow. At all. He is easily the weakest part of this series for me. I know. I know. He’s amazing. He’s (literally) superhot. He’s so sexy. Etc. I get it. He is all of those things, I’m not going to argue it.

He’s also immature, quick to violence, condescending, jealous, and more than happy to threaten, verbally and physically, Charley when she doesn’t do exactly what he wants her to do the minute he wants her to do it. No thank you. We are 11 books into a 13 book series, and he hasn’t changed at all. I don’t care what he looks like or how great he is in bed. The first time he pinned me to a wall by my throat would be the end of it. And he’s STILL. DOING IT. 11 books in. Being the son of Satan isn’t an excuse. He knows how to behave; he does it with other people. He just can’t seem to stop being a steaming pile of crap to Charley.

But, Heather, you gave this book 4 stars. You can’t hate him that much. But I do. Seriously, I really do. But I love Charley and the rest of the gang so much that it makes up for how much I don’t like Reyes. To be fair, I find the way most of the men in this series treat Charley to be off-putting. Reyes is the only one who really physically assaults her on a regular basis, but the her uncle Bob in particular is constantly running around putting himself in danger because he’s trying to protect her. SHE’S A GOD. She LITERALLY can’t be killed except by another god. Why does Bob think keeping her in the dark about men who wish to hurt her is at all necessary or effective? And it’s all the time. I get that she’s flighty and scatterbrained sometimes, but she’s not stupid. She’s smart, she’s resourceful, and she’s proven over and over again that she can take care of herself. In every book she learns a little bit more about who she is and what she can do. It’s ludicrous that these humans keep treating her like a fragile doll.

I’m sad that we’re coming to the end of this series, but I think Darynda Jones is ending it in the right place given where the series has gone. If she had left Charley closer to who and what she was at the beginning, a PI who happened to be the grim reaper, she could have gone on indefinitely, but this has obviously been her plan all along, and it’s building up to what will probably be a phenomenal last two books.

Here we find Charley still trying to balance what she sees as her regular, human life as a PI, and her newly discovered life as a god. This entry into the series wraps up several long-simmering storylines, and does so spectacularly. I don’t want to say too much about the details of the story because this is a series that needs to be read in order. I mainly wanted to write this review to relieve my conscience about my long-held Reyes secret.

I really do like this one, though, and it’s always one of the first I recommend when someone is looking for a new UF series to try out. I just wish that if Charley had to be with someone, it would be someone who didn’t leave her dangling from a roof top because he didn’t like her plans for the day.