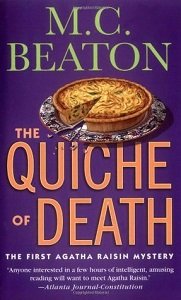 Putting all her eggs in one basket, Agatha Raisin gives up her successful PR firm, sells her London flat, and samples a taste of early retirement in the quiet village of Carsely. Bored, lonely and used to getting her way, she enters a local baking contest: Surely a blue ribbon for the best quiche will make her the toast of the town. But her recipe for social advancement sours when Judge Cummings-Browne not only snubs her entry--but falls over dead! After her quiche's secret ingredient turns out to be poison, she must reveal the unsavory truth…
Agatha has never baked a thing in her life! In fact, she bought her entry ready-made from an upper crust London quicherie. Grating on the nerves of several Carsely residents, she is soon receiving sinister notes. Has her cheating and meddling landed her in hot water, or are the threats related to the suspicious death? It may mean the difference between egg on her face and a coroner's tag on her toe…

Agatha Raisin is not your typical cozy mystery heroine. She’s fifty-three, a retired PR executive who sells her business and retires to the Cotswolds. She’d spent a happy vacation there as a child and had always had it in her mind as an idyllic place to live.

When she arrives in her newly-purchased cottage in the village of Carsley, however, she’s unprepared for how bored she is. After living in London for so long and used to being constantly busy and surrounded by people, she’s having a tough time adjusting, so she decides to entire a quiche in a local contest, envisioning a blue ribbon and loads of friends somehow resulting from this. To that end, she goes back to London to buy a quiche from a noted quicherie, hoping no one will notice it’s store bought before pinning the ribbon on the quiche.

I loved this setup. Agatha is not immediately likable, she’s used to dealing with celebrities and high-profile clients, not locals in a sleepy little village. When the quiche competition judge dies after eating her quiche, she’s more upset about being discovered as a cheater than she is about the actual death. The local police decide the death was accidental, and Agatha mostly agrees, but just can’t seem to stop herself from asking questions and overhearing information that has her questioning the death. She comes across as someone who retired too early, and isn’t so much interested in justice for the dead, possibly murdered, man as she is someone who just wants something to do and finds this investigation to be the most exciting option.

There are currently 26 Agatha Raisin mysteries. I don’t think I’m going to immediately pick up the next one and move on, but I’ll keep it in the back of my head. The audiobook was narrated by Penelope Keith, who is a new narrator to me. I thought she was great; she sounded exactly like what I would have expected Agatha to sound like. She was able to get across the various characters and I never had any trouble knowing who was speaking. It looks like she narrates most of them but not all of them. There are several other narrators in the mix as well, including one book narrated by Davina Porter, who I know I’m not alone in loving.