I don’t know what Stefanie London has been eating or drinking lately, but every book of hers I’ve read has been better than the one before, and Unmasked was no different.

I’m always hesitant with the best friend’s older brother or younger sister trope. (And it’s generally that way. Rarely is it an older sister or a younger brother). Especially the younger sister trope. It’s always presented as if the worst thing the brother can imagine is his friend dating his younger sister. Which I have a rant about. This is not the place for that rant, but trust me, it’s coming.

But that’s not what Stefanie London does here. In Unmasked, we have Lainey, who has been in love with her best friend’s older brother since she was a teenager. She’s watched him date, get married, get divorced, go on an Austrailian version of The Bachelor, and now he’s single again. She’s the one who has decided Damian is off limits because he’s Corinna’s older brother. She’s never even told Corinna how she feels about Damian, so she has no idea if Corinna would actually be ok with it or not.

But now, all bets are off. She’s landed her dream job as a social media manager to one of the top stylists in London, so in two weeks she’s packing up her entire life and leaving Melbourne for good. So really, where’s the harm in finally putting it all out there and seeing if she could have a chance with the guy of her dreams? And when the perfect opportunity to do exactly that lands in her lap, why would she even think twice? One application of red hair dye and a gorgeous borrowed dress and mask later, and Lainey is all set to seduce Damian at an upcoming masquerade ball.

I admired Lainey for going after what she wanted, although I really wish she could have done it without the subterfuge. Only in a romance novel would I accept one person tricking another into having sex with them. Even if it is completely hot limo sex. And, true to the new, hotter Harlequin Dare line, Lainey and Damian do have hot limo sex. In Romancelandia, it’s acceptable because there really is no other way to get Damian to even consider the notion of having sex with Lainey, so it appears to be her only hope, especially since she’s getting ready to move, but in real life, this would not fly.

Lainey was the exact type of heroine I like. She was smart, funny, sarcastic, and willing to put herself out there, even when she was terrified to do it. I really do like this trait in characters. I have a lot of anxiety, and because I’m a homebody introvert who runs my own business, I’m often forced to do things that make me extremely uncomfortable. It’s so hard. It’s exhausting, it takes everything I have to do it, and I’m often knocked out for the rest of the day by one video chat or phone call. I so admire people who can take an uncomfortable situation and just rock the fuck out of it. It took her impending move to London to force Lainey to finally put things in motion with Damian, but once she decided to do it, she did what she had to do to make him realize how good they could be together. Even when Damian discovered her ruse and was rightly furious with her, she stood her ground, stood up to him, and told him how she felt. And when Damian made it clear that it would never work between them and that he wasn’t going to fight for them? She left. She packed up all of her shit and went to London like she’d planned. I loved her.

Damian was just as well-done a character as Lainey was. He was so grumpy. There is a fine line between grump and asshole, and Damian straddled it perfectly. His marriage imploded and even though he knows he’s gotten over it, he has absolutely not gotten over it. Currently, his entire professional life revolves around getting revenge on the man who his wife had an affair with, which is the very definition of “not over it yet”, but he doesn’t see it. He doesn’t see how completely stuck in the past he is until Lainey comes along and dropkicks him out of his funk. It takes some big moves on Lainey’s part for Damian to come around, but when he does finally figure out what’s important, he doesn’t hesitate to go after it.

Damian and Lainey both struggle with where they are in their lives and the fact that the futures they envisioned for themselves are not coming to fruition. Lainey thinks she’s moving on by moving to London, but she’s running away from her current situation more than she’s running toward something. And Damian is stuck exactly where he was when he first discovered his wife cheating on him. He thinks that by getting revenge he’ll finally be able to move past the cheating, but as readers, we know that life doesn’t work that way. No matter how each of them thinks they’ve moved on, they haven’t.

I’m not going to give away the exact circumstances of the HEA, but I absolutely freaking loved it. Lainey and Damian were able to be together without either of them having to sacrifice their dreams or what they wanted in other aspects of their lives. So often this ends up with an HEA that involves one of the characters (usually the woman, but it’s getting better) having to move, or quit a job they really like, or give up a dream they have so they can be together. Stefanie London managed to get them both everything they wanted including each other, and I loved it.

This book was one of my favorites by Stefanie London. It had so many of my favorite parts of a romance. Women who know what they want and go for it. Grumpy men who are smoking hot. Great sex, no virgins, sarcasm, snarky banter, and an HEA. I don’t think I’d go so far as to call this one a romantic comedy, but I definitely found myself laughing at some of the banter. Stefanie London does that so well, and it seems like it gets a little bit better with each book. 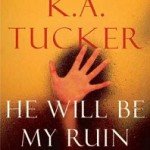