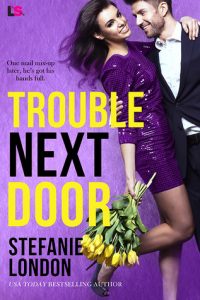 McKenna Prescott is the queen of picking the wrong men. When her latest boyfriend dumps her, she decides to devote her time to “exploring herself” (read: drinking wine and ordering sex toys online) and starting her freelance makeup business. That is, until an embarrassing delivery mix-up puts her sexy, gruff neighbor in her path…

Beckett Walsh is married to his job…which is a deal-breaker for the woman he’s supposed to be marrying. Even worse, his would-be father-in-law has pulled support from Beckett's startup and now Beckett stands to lose everything. But the gorgeous, crazy makeup artist from down the hall has an equally crazy but mutually beneficial idea: if he convinces his sister to hire McKenna for her high-society wedding, McKenna will teach him about what women want so he can get his fiancée back.

All he has to do is make sure he doesn’t fall for the wrong girl.

Another really charming read from Stefanie London. McKenna (I will absolutely spell that wrong at least once in this review because I have a niece named MaKenna), Prescott, having been recently dumped, has sworn off men to focus on herself. Which – haven’t we all. It rarely works out the way we think it will. In order to aid herself on her journey of self-discovery, she drunkenly orders a bunch of sex toys, which are delivered to her neighbor instead of her. Because, in her drunken state, she typed her transposed some of the digits in her apartment number. That’s our general setup, and while we’ve certainly seen “mis-delivered packages, hijinks ensue” before, what follows is pure Stefanie London.

First, a quick note – if you don’t follow Stefanie on social media, you should. She loves makeup. Seriously – loves it. So much that I was surprised to realize that this is the first makeup artist she’s written. And she loves to experiment with it. I love seeing what she comes up with, because I love seeing people take risks and try new stuff with their makeup. My own style is mainly “which color of everything most closely matches my own skin so you can’t even really see it?”, so seeing Stefanie try these amazing eye looks and new lipsticks feeds my pretty-makeup-loving soul and makes me wish I had any idea what I was doing.

Back to the book. McKenna and Beckett Walsh are neighbors, so they know each other in a vague, nod-in-the-hall way, but they’ve never spoken. Not until McKenna needs to knock on his door to ask for her box of sex toys. After a quick couple of conversations, they realize that each of them can help the other. McKenna is willing to help him figure out how to get his ex-girlfriend back, and Beckett will put in a good word with his sister, Kayla, who is engaged to a member of a big deal family. McKenna realizes that if Kayla will hire McKenna to do her wedding makeup, it could be exactly the boost she needs to launch the freelance makeup business she’s been trying so desperately to get off the ground.

I just… I just really liked these two. Beckett can be seen as cold, but he’s really not. He’s just more comfortable observing and using as few words to express himself as possible. He’s singularly focused on getting his own business, a financial app, off the ground, and he has no room in his life for anything else. Which is why his girlfriend left him in the first place. He’s constantly worried about his family, his mother in particular, and he just doesn’t want anything to get in the way of what he feels is his responsibility.

McKenna, on the other hand, is a force of nature. She has no filter, no pause button. She tends to say exactly what’s in her head without thinking it through. She lives her life out loud, her whole sparkly, glittery self, and she has no time for anyone who wants her to tone down and get a “real” career, whether that’s the asshole breaking up with her at the start of the book or her family. Together, they were just so charming. And funny. And sexy.

My biggest problem with the book, the main reason it was four stars instead of five, is Beckett’s determination to get his ex-girlfriend back. He knew that they didn’t belong together, he knew that he didn’t love her, but when they broke up, Sherri’s dad pulled his offer of seed money for Beckett’s business, and the business couldn’t make it without that money. It’s just not a great look for Beckett, deciding to sentence himself and Sherri to a lackluster life because he needs that money. He knew what he was doing, he just decided that it didn’t matter as much as getting his app up and running. His family needed that money, and he didn’t care what he had to do to get it.

Obviously Beckett eventually pulls his head out of his ass, but the fact that he even entertained the thought of using Sherri that way rankled with me a bit. But I do love a quiet, stoic hero, and he never actually went through with his plan to get her back, so I eventually forgave him.

Overall, this was exactly what I’ve come to expect from Stefanie London. Beckett and McKenna were adorable to watch fall in love, their story was funny, charming, and sexy, and really what else could you ask for?

One response to “ARC Review – Trouble Next Door by Stefanie London”