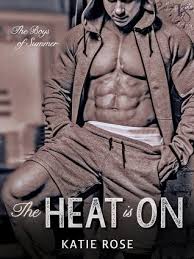 The Heat Is On by Katie Rose
Series: The Boys of Summer #4
Series Rating:

Perfect for readers of Joanna Blake and Sawyer Bennett, hailed as “charming, sexy, and smart” by Lauren Layne, the Boys of Summer series from award-winning author Katie Rose heats up as a homegrown baseball star returns to snag the one that got away.
When veteran catcher Connor Jackson gets traded to the New Jersey Sonics, he welcomes the opportunity to possibly cap his career with a World Series ring in his home state. But there’s another reason Connor is glad things have come full circle. In pursuit of hardball glory, he left behind his college sweetheart, the one girl he could never forget. Seeing her again stirs up long-lost desires . . . and this time, he’s determined not to strike out.
A divorced mother of four, Tracy Coleman no longer aspires to gossip-mag glam—but she’ll make an exception for a date with Connor. Their chemistry is hotter than ever, and being alone with him is more seductive than she anticipated. Who could blame her for leaving out a little detail like the kids? Now all she has to do is come clean and convince the man of her dreams that they—Connor, Tracy, and her children—have a future together.

The most I can say about this one is that it was ok. There wasn’t anything here that was terrible, but I didn’t love it. A lot of the dialogue didn’t ring true to me; there weren’t enough contractions, for example. People speak in contractions. “There is a man who is on a different baseball team and could be someone we should speak to” sounds really stilted to me, especially when it’s a baseball player and his coach talking. (That’s not a direct quote from the book, obviously, just an example of what I mean when I say it sounded stilted.) There was a lot of telling and not enough showing.

As for the story itself, the one thing that stuck with me, even after Connor and Tracy were together, is the fact that they went on several dates and she never once mentioned that she had any children, much less four of them. It bothered me more than it apparently did Connor. We all know people with children, even if we don’t have any ourselves. They do not go several full evenings and several more phone conversations without even mentioning their children. It was obviously such a deliberate exclusion on her part. Hell, I don’t make it through one conversation with anyone without mentioning my dog, much less if I had kids. It’s the nature of people. We talk about the people (or animals) closest to us. It was especially strange to me because she and Connor had dated in college. They weren’t just strangers meeting for the first time. They had some history. And I didn’t really understand why Connor didn’t question it more. “I randomly have to leave our dates each time by 8:00” isn’t normal. He knew she’d been married for fifteen years; it shouldn’t have been such a mystery to him.

The rest of the story went on fairly predictable lines. They dated, they both got freaked out, they took some distance, they dated, both got freaked, took some distance, etc, etc. The side characters were all fairly one-note, which is somewhat expected in a book this short. Tracy’s best friend Jillian was a super-supportive cheerleader who randomly showed up when Tracy unexpectedly needed a babysitter and told Tracy how great she was. Tracy’s mom was frowny because Connor already left Tracy once in college, for reasons that were never really explained, and she thinks Tracy is making a mistake. Tracy’s ex, Jeremy could maybe be a stalker, maybe have some genuine mental illness, could maybe just be a jerk, it’s never really resolved, but after once conversation with Connor, he’s no longer an issue. Connor’s teammates seem to exist only to tell Connor that he needs to be the leader of the team. There was also an awful lot of sitting around the locker room as a group and discussing Connor’s feelings for Tracy and her kids.

I know this sounds like I didn’t like the book. I didn’t dislike it, I was just a bit underwhelmed by it. The telling and not showing really hurt it, I think. It’s a romance novel. “That thing Connor was doing was really turning Tracy on” doesn’t tell me much. I just wanted a little more from this one all around.

Colleen is the bestselling author of twelve historical romance novels published under the names Colleen Quinn and Katie Rose. She is the recipient of the Romantic Times Achievement Award, and the Colorado Romance Writer’s award, as well as the Doug Perry award for excellence in journalism. A graduate of Temple University with a BA in Communications, Colleen lives on a lake in Medford Lakes, New Jersey, and is hard at work on her next novel.