Posted May 16, 2016 by smutmatters in ARC, Contemporary, Reviews / 0 Comments 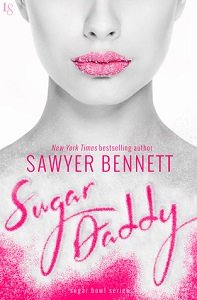 Seduction has never been so sweet! The New York Times bestselling author of the Cold Fury series—Alex, Garrett, Zack, and Ryker—returns with the first novel in a hot new trilogy.
Sela Halstead lost her innocence in a way that no sixteen-year-old should ever have to endure. She’s spent years trying to forget that night even while wondering about the identities of the monsters who brutalized her—until a telltale tattoo flashes across Sela’s TV screen. The incriminating ink belongs to Jonathon Townsend, the millionaire founder of The Sugar Bowl, a website that matches rich older men with impressionable young women. Obsessed with revenge, Sela infiltrates Townsend’s world, only to come face-to-face with a tantalizing complication: Beckett North, his charismatic business partner.
The tech mastermind behind The Sugar Bowl, Beck always gets what he wants, in business and in bed. And yet, for a man who’s done every dirty thing imaginable, there’s something about the naïve, fresh-faced Sela that sparks his hottest fantasies. Because with her, it’s not just about sex. Beck opens up to her in ways he never has with other girls. So why does he get the feeling that she’s hiding something? In a world of pleasure and power, the shocking truth could turn them against each other—or bind them forever.
Note: Sugar Daddy ends on a cliffhanger. Sela and Beck’s story continues in Sugar Rush and Sugar Free!

Trigger Warning – this book deals with a fairly brutal gang rape. It’s described pretty realistically, but only in flashes.

First off, this book ends on a cliffhanger. It’s going to be a trilogy, and the next two books are supposed to be out in 2016, so we shouldn’t have to wait too long for the conclusion, but I think it’s important to mention that. I had no clue it was coming, and I prefer to keep the percentage completed display on my Kindle turned off, so I was gobsmacked when I turned the page and realized I was at the end. It’s completely my fault. It’s in the description of the book on Netgalley, but I didn’t see it. I was so excited to see a new Sawyer Bennett book up for review that I didn’t read the description very closely.

So, now that that’s out of the way, on to the actual book review. There might be some light spoilers, but nothing you don’t find out in the first chapter, or in the description itself, so I don’t think it’s giving too much away.

Sela Halstead was gang raped when she was sixteen. She was roofied at a party, so she doesn’t have much more than flashes of the incident and the pictures and records from her resulting trip to the emergency room. But then she sees a fluff report on a young, hot multi-millionaire frolicking on the beach with his latest conquest and the tattoo on his shoulder triggers a flashback. She realizes that Jonathon Townsend was the ringleader that night and she quickly comes up with a plan to take him out.

Jonathon Townsend and his business partner Beckett North own and operate a website called The Sugar Bowl. It’s a dating site specifically geared toward older wealthy men who want young, hot women on their arms. According to the very strict contract on the site, the wealthy older men will provide these young ladies with paid-off student loans, cars, houses, clothes, jewelry, whatever they want in exchange for nothing but their companionship and dinner dates. Everyone on earth knows what that arrangement actually is, but JT and Beck and their army of lawyers have been very careful to ensure that nothing on their site or in their contracts even hints at a money/sex exchange. As a result, they’re made millions.

Sela’s plan to take out JT, to literally murder him, is an unnecessary distraction in this story. It’s so scattered and not-well thought out. I think it’s literally, “I’m going to demand his secretary let me into his office and stab him with a pen.”, or something. If it were just something she randomly thought or fantasized about, that would be one thing, but she claims that’s her actual plan. (Ok, in all fairness, I just double-checked, and it’s actually “Get him to want me but not recognize me, get to his house, shoot him in the face.”, but that’s really not much better.)

Her plan also only comes up once in a while. Usually long after I’ve forgotten about it again, she’ll gave lovingly at Beck and realize he may not like her after she murders her partner and lifelong friend. But that’s it. Other than that it never really comes up. The whole story would have been a lot more interesting to me without that randomly coming up. How would Sela deal with dating Beck, and man she genuinely believes was not there that night and wasn’t involved in her rape, a man she believes to be a good person and a person worth loving, when he’s the business partner and lifelong friend of a man who so horribly brutalized her? That’s a more interesting story.

In fact, that exact issue gave me pause more than once. It had me questioning Beck in ways I don’t normally question romance heroes.  I flip-flopped on him so many times. He knows that JT is out of control. The drinking, the drugs, the constant stream of women are taking a toll and starting to have an effect on their business. But not quite enough of an effect yet for Beck to be able to force JT out according to their partnership agreement. So does Beck know exactly how far JT can and has gone and Beck is just turning a blind eye to it? Or does he genuinely believe that JT is a good guy deep down who has just let success go to his head? There’s one incident that makes me think Beck will finally be forced to confront JT’s  depravity head-on, but JT talks his way out of that one with an ease that makes me question Beck yet again. It’s completely natural to want to believe the best in those we love, but this particular incident stretches my ability to believe in Beck.

There’s obviously more to Beck than what we’ve seen. I don’t think he was one of the men who raped Sela, even though he went to the same college as JT and has the same tattoo. He says that only a small group of members of their fraternity got it, which makes it sound like he could have been involved. The math doesn’t add up that he was actually there with Sela, but I wouldn’t be surprised to hear there were other similar incidents with this small group who all have the tattoo. Beck also has a hair-trigger when it comes to being lied to, and a radar for when Sela tells even the smallest white lie, which makes his easy belief of JT’s bullshit even more difficult to fathom. It leads to the cliffhanger, which was pretty brutal to read. But it was certainly enough of a cliffhanger for me to have already preordered the second and third books in the trilogy, though. I have to know how this story ends.