The day a judge gave me the choice between going to prison or going to college was the day I vowed to stop stealing. Never again would I see something beautiful and beyond my means and take it, just because I wanted it. Just because I could.

When I moved in with Jerry, it was with good intentions. I needed a place to live while I got my degree, and he needed a roommate.

Then I saw Aster.

Blond and beautiful, good, pure, sweet, smart…and Jerry’s girlfriend. She was everything I never thought I could have. Except…maybe I can.

So I put a plan into action. Yeah, I’d probably go to hell, but it would be worth it. I wanted Aster. I wanted her yesterday and tomorrow and every possible way.

But you know what they say.

Be careful what you wish for…because you just might get it.

This one was… Hm. I struggled with the general concept of this book. The blurb mentions that the hero, Aidan, “puts a plan into action”, but I wasn’t really expecting the actual plan. It’s really a terrible, shitty, awful plan that made it really difficult for me to come around on this one.

Aidan is given a choice by a lenient judge who sees that Aidan has more to offer the world than car theft. He can go to jail, or he can go to college. A local college has a program specifically set up for these kids, and Aiden, not wanting to go to jail, wisely chooses college. On his first day, he meets his new roommate, Jerry, and Jerry’s girlfriend Aster.He immediately wants Aster, but knows that she’s not the kind of girl who cheats on her boyfriend. Which is when he comes up with his grand plan.

I’ll put it in spoiler quotes in case you don’t want to see it. View Spoiler »Aiden invites Jerry to a bachelor party with some of his rougher friends. Before the party starts, he pays one of the strippers to have sex with Jerry. This way he can make sure Aster finds out Jerry cheated on her, causing her to break up with him. Then he’ll be in exactly the right place for the sure-to-appear revenge fuck Aster will want. « Hide Spoiler

It goes partly according to plan. He succeeded in breaking Aster and Jerry up, but it didn’t have the desired outcome. And in short order, Aster finds out Aiden’s part in the break up and is as pissed as she should be. This whole thing, though, bothers me. Your fleeting desire to have one-time sex with someone does not mean that you get to destroy someone else’s happy long-term relationship. This is such a complete dick move that I had a difficult time coming back from it. Aster is suitably pissed, but they keep getting thrown together by various situations, which gives Aiden time to work on her and get her to come around. He does feel bad about what he did, but not really. He got what he wanted, and eventually Jerry starts dating someone else, so in Aiden’s mind it all worked out in the end.

This story was well-written; I would definitely read more by Julianna Keyes, but I never quite made it back from Aiden’s actions in the beginning. And he does something else pretty stupid about 80% of the way in, which as far as I can tell worked out because of sheer dumb luck. Which doesn’t give me a lot of hope that Aiden learned anything at all from his experience here or from what landed him in court in the first place. He and Aster definitely had chemistry, but I’m not convinced it would have translated into more than one night. Or more than one night, but not necessarily a HEA.

Julianna Keyes is a Canadian writer who has lived on both coasts and several places in between. She’s been skydiving, bungee jumping and white water rafting, but nothing thrills – or terrifies – her as much as the blank page. She loves Chinese food, foreign languages, baseball and television, not necessarily in that order, and will go to her grave swearing that “ain’t” is not a word. She has volunteered in Zambia, taught English in China, and dreams of seeing pink dolphins in the Amazon. It’ll happen. 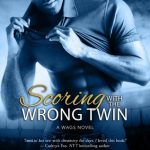