I received this book for free from St. Martins in exchange for an honest review. This does not affect my opinion of the book or the content of my review. 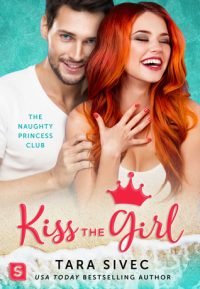 A struggling antiques collector finds herself falling in love with a millionaire playboy; but can she ever be a part of his world?

Meet the Naughty Princess Club, a series from USA Today bestselling author Tara Sivec that brings readers to Fairytale Lane and the hilarity—and romance—that three women fall into once they decide to strut their stuff and bring on their own happily ever after.

While her friends have broken free of their insecurities, Ariel Waters is struggling to come out of her shell. Her ex-husband took away her voice and her self-confidence, and Ariel is drowning under a sea of debt to afford the alimony she has to pay him. She refuses to ever fall for a man’s charms again, and is determined to make her own way.

When her house and her beloved antiques are taken by the bank after too many missed payments, Ariel finds herself adrift until the infuriatingly charming Eric Sailor comes to her rescue. Although she can’t stand the millionaire playboy, Eric’s kindness and unconditional support reveal hidden depths and a love that Ariel never imagined she could find.

But there are outside influences who will stop at nothing to keep them apart; can Ariel and Eric weather the storm and find a way to be together?

This book, Ariel specifically, was not what I was expecting based on that cover. The cover shows her to be a laughing, light-hearted, falling in love, lovely young woman. That is not who she is, when the book opens, specifically.

…You called me, dickface. Who else would be answering my phone? Are you dying?”

“Then for the love of God, why in the actual fuck are you calling me? Hang up and text me like a normal person or I will slit your throat.”

That’s a conversation Ariel has with her best friend on page 1. And, look. I loathe talking on the phone. It doesn’t matter who it is, I hate it. This is a little much. And later:

“I asked for a large and the dumb shit behind the register didn’t now what I was talking about,” I finally speak in a low voice that quickly gets louder with each word I say. “Vent-grande-horseshit nonsense. I just wanted a motherfucking LARGE CUP OF GODDAMN BLACK COFFEE!”

That’s it. I’ve officially lost it and I give zero fucks. You cause one little scene at Starbucks and knock over three stacked towers of empty cups with a karate chop and suddenly you’re an animal that requires not one, but four sheriff’s deputies to handle you.

Yes, Starbucks is annoying, but again, this is a little much. And this is not a case of criticizing the heroine for behavior I’d consider fine in the hero, either. I try to be really conscious of that. That behavior is ridiculous in anyone over the age of 6. Maybe even 5.

As we got more of Ariel’s story, I could see why she was the way that she was, but that didn’t make her behavior or the way she talked to people any easier to deal with. And to be clear, it’s not the cursing. Curse it up. (I say that because I’ve seen people say she curses too much. Fuck those people). I’ve told people that I wish they’d stop calling and just text me, but I didn’t threaten to slit their throats when I did it. She’s just so abrasive, I don’t know who would be able to put up with that part of her in the beginning to get to see where she ended up.

But I did love where she ended up. Her abrasiveness came from a place of insecurity, of self-loathing, and self-doubt. Her ex had done a real number on her, constantly putting her down, making her feel terrible about herself, making her think she was never going to be worthy of love. Not to mention what he had done to her finances, by tricking her into paying him alimony for several years. Frankly, I don’t think the punishment he got for that was enough.

Eric was a sweetheart, but a little bland for me. He was able to take all of the shit Ariel dished out, and do it with a smile and some good banter, but he never struck me as anything other than just a nice guy who really liked Ariel. There wasn’t really anything that stood out to me. Eric’s best quality, and it is not to be understated because it’s important) is that when Ariel was in trouble, when she was trying to stand up to her ex or fight for her business, he stood back, supported her 100%, and let her fight her own fights. He made sure she knew that he was there, but she’s the one who took on the dragon lady who was holding their business hostage. She’s the one who finally stood up to her ex and put him in his place. Eric was there, both emotionally, and physically, but he let her shine. This was such an important part in her getting back her confidence, and re-learning just how amazing she was.

By the end of the book, Ariel still had a foul mouth, and she was still sarcastic and grumpy, but she wasn’t nearly as caustic as she had been. She was much closer to what I had initially expected when I saw the cover. This is the third and final book in the series, but I didn’t have any trouble following along. I enjoyed this, I liked the Little Mermaid references, though at times they seemed shoehorned in, but overall I’d recommend this one.

Tara Sivec is a USA Today best-selling author, wife, mother, chauffeur, maid, short-order cook, baby-sitter, and sarcasm expert. She lives in Ohio with her husband and two children and looks forward to the day when they all three of them become adults and move out.

In her spare time, Tara loves to dream about all of the baking she’ll do and naps she’ll take when she ever gets spare time.

Tara loves tackling new genres so there’s something for everyone! Currently, she has books in the following categories: