Sometimes it's not the destination, but the detour...

Kayla has the perfect strategy for a broken heart: work, work, and more work. Then a storm sends her car skidding off the road, stranding her in Mount Pleasant. Fortunately, rescue comes in the form of the incredibly handsome but gruff Brent Masterson. And he's hot enough to tempt Kayla into doing something she never thought she could do...

Brent Masterson swore he would never give into the fierce attraction that's been sizzling between him and Kayla since they first met. He has his own demons, and he won't risk his heart again. Not even for someone as gorgeous and amazing as Kayla. So...how exactly did he end up in Kayla's bed last night?

But sometimes all it takes is an ice storm to show two broken hearts the way home...

The cover of this one is a little misleading. Only a little, and it’s not a huge deal, but it distracted me when I first started reading. The book is about a couple who meet when Kayla’s car skids off the road in an ice storm and Brent gave her a ride to his grandmother’s B&B. There’s nothing on that cover that says ‘ice storm’ to me. I realize it’s not a big deal, but it bugs me when a book cover is so discrete from the content.

But – on to the content itself. This book was a quick read. Kayla is in the aforementioned ice storm because she was unjustly suspended from her job for a week, so she took an impromptu trip to visit her brother. There’s no room for her to stay with him, so when her car slides off the road and Brent helps her out, his grandmother’s B&B makes a lot of sense, even though it’s not technically open for the season yet. I loved the way Kayla pitched right in to help with the preparations, even though she was a guest. She may be a white-collar executive in her day-to-day life but she had no problem getting her hands dirty and doing what she could to help the people who were helping her.

Brent isn’t so sure it was a good idea to bring Kayla along. His life has been pretty well structured for the last few years and he’s content with that, if not completely happy, and maybe a little lonely. But Kayla is almost certain to upset that apple cart, and he’s not sure he’s ready for that. So even though he agrees to help her out, he does his best to stay away from her, even after they spend her first night at the B&B together. He doesn’t regret it, exactly, but he’s been burned, and he’s not interested in anything deeper than that first night.

Kayla’s not in a position to get involved in a relationship, either. She’s only in town until her car is fixed, then she’s heading back to clear her name at work and get her job back. Her father lives near her, and she feels that she can’t leave him for too long, even though there’s no real reason for her to feel that way. She’s never had time for a relationship, has always put her career ahead of everything else, and she doesn’t know how to change that now.

There wasn’t a ton of drama to this, just two people finding their way to each other. All of the sex happens off the page, and they fall in love over the course of a few days. I’m not sure I buy making big life decisions after such a short span of time, but this is hardly the first romance novel to do that. If you’re looking for a light-hearted, quick read, be sure to pick this one up.

Kyra Jacobs is an extroverted introvert who writes of love, humor and mystery in the Midwest and beyond. Her romance novels range from sweet contemporaries to urban suspense, and paranormal/fantasy to YA. No matter the setting, Kyra employs both humor and chaos to help her characters find inspiration and/or redemption on their way to happily ever after.

When the Hoosier native isn’t pounding out scenes for her next book, she’s likely outside, elbow-deep in snapdragons or spending quality time with her sports-loving family. Kyra also loves to read, tries to golf, and is an avid college football fan.

Be sure to stop by her IndianaWonderer blog for tidbits about her upcoming novels, as well as stories and musings in between book releases. 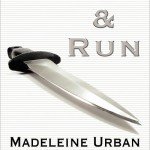