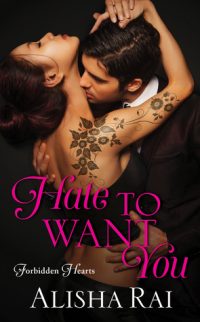 That was the deal. Every year, Livvy Kane and Nicholas Chandler would share one perfect night of illicit pleasure. The forbidden hours let them forget the tragedy that haunted their pasts-and the last names that made them enemies.

Until the night she didn’t show up.

Now Nicholas has an empire to run. He doesn’t have time for distractions and Livvy’s sudden reappearance in town is a major distraction. She’s the one woman he shouldn’t want…so why can’t he forget how right she feels in his bed?

Livvy didn’t come home for Nicholas, but fate seems determined to remind her of his presence–and their past. Although the passion between them might have once run hot and deep, not even love can overcome the scandal that divided their families.

Being together might be against all the rules…but being apart is impossible.

I received this book from Avon at RT17. You should have heard the collective “Ooooooohhhhhhh” in the room when the Avon rep held it up and told us we’d be getting an ARC of this. It was deafening. I mean, not only is the newest Alisha Rai, which is always a crowd-pleaser, but just look at that cover. It’s stunning.

I read this book more than a week ago and I’m still not over it. A lot of authors have tried the star-crossed Romeo & Juliet story and it doesn’t always work. I heard about this book a few months ago when Alisha Rai was on the Smart Bitches, Trashy Books podcast, and I figured that if anyone could do it, it was Alisha Rai. But, really, it’s hard in 2017 to come up with a legitimate reason why two consenting adults can’t be together. “Our families don’t like each other” is one of them, but it’s hard to do convincingly.

Oh, me of little faith. I don’t really cry at books, but Nicholas and Livvy had me about as close as I get. From the very first page, the very first sentence, I was completely drawn into this world. Actually, I started the book, realized I only had about an hour to read before I had to go somewhere, so I put it down until I had enough time to read it in one sitting, and I started it over.

I don’t really want to say too much or try to describe too much about this book. I really, really want you to read this book and experience without me putting any ideas out there. It’s so good. Beautifully written, with a tortured hero, and an angsty tattoo artist heroine who takes no shit and is so used to getting hurt that she has a shell around herself a foot thick, and an actual, honest-to-dog family feud that has affected generations of people and has no chance at ending. This is not going to be solved by these two crazy kids getting together and mending their families differences.

The next book comes out in November, and I’ve already pre-ordered it. I’m actually ok waiting for it for a little while. This book packs an emotional wallop and I can only take so many of those in a short amount of time. Plus, the anticipation just makes it that much sweeter.

In case it’s not clear, I can’t recommend enough that you go out and get this book immediately. Block off some time when you can sit and read it and have your tea or wine handy with your Kleenex. You’re going to need it.