Posted May 12, 2015 by smutmatters in ARC, Contemporary, Reviews / 0 Comments 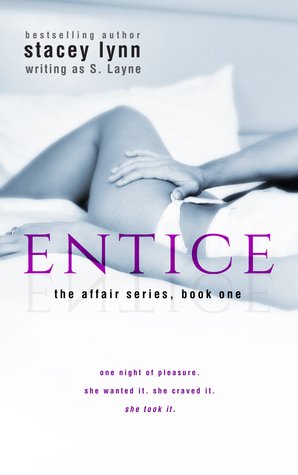 Laurie Baker is at a critical point in her life. She has a big decision to make, and a week-long conference in Chicago, so she heads to the Windy City prepared to for some serious soul-searching. What she’s not prepared for is Liam Parker. He’s staying at the same hotel, also for a work conference, and after a meet-cute in the lobby, both are hit with a pretty serious case of insta-lust. They spend most of their non-working time together, not leaving the hotel. By the time Laurie goes home, she feels a little more settled, but a series of revelations when she gets home sends her life into even more of a tailspin.

I didn’t realize this would end on a cliffhanger. The cover says “The Affair Series, Book One”, which I thought meant book one in a series, not part one of a continuing story. So I wasn’t quite prepared for the ending.

There’s a lot of good stuff in this book. Laurie is conflicted about potentially ending her marriage, and her back and forth feelings on the matter struck me as real. She and James have been together since high school and a relationship like that isn’t one anyone would give up on quickly or easily. Even knowing that James betrayed her, she goes back and forth a few times. I didn’t know exactly which side she was going to end on. And, as it turned out, I still don’t know because of the aforementioned cliffhanger. I think Laurie made her decision fairly quickly after being genuinely conflicted for so long, but sometimes that’s just the way it goes. However, as much as I enjoyed this story, I think it would have been better for Laurie to make this decision without Liam’s influence. Not that he was deliberately trying to sway her one way or the other. In fact, he was pretty adamant, especially in the beginning, about not wanting to be in a relationship. But it’s difficult to make a decision about one man when there’s another in your daily life.

And Liam is in her daily life; one of the secrets she discovers during their week in Chicago is that as of Monday morning when she returns home, Liam will be her boss. To be fair to Liam, he didn’t know that when they began their affair. He found out and didn’t tell her, but he didn’t know initially. But since James betrayed her by sleeping with his assistant, who is also Laurie’s best friend, I didn’t feel too badly about that piece of it. But that certainly did make it difficult for Laurie to get any perspective on the two relationships.

There were some errors in the book – editing, grammar, and some continuity – which bothered me when I came across them. But they weren’t terrible. Hopefully in the sequel that sort of stuff has been worked out. And I’ll definitely read the sequel; I want to know what Laurie ends up doing.