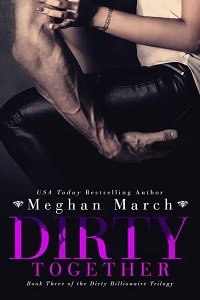 My wife.
I love saying those words.
She’s mine, and if she thinks I’m going to let her run without tracking her down and bringing her back to where she belongs—with me—then she’s about to be introduced to a new reality.
Because I’ll fight dirty to give her the happily ever after she deserves.
Dirty Together is the final book in The Dirty Billionaire Trilogy and should be read following Dirty Billionaire and Dirty Pleasures.

This one picked up where the previous book, Dirty Pleasures left off – Holly has run out on Creighton again, going as far as leaving him the same note she did the last time. Creighton is tracking her down, which is pretty easy this time, he just asks one of her friends where she went. And for once, when he found her, they had an actual conversation, discussing their issues and agreeing that neither of them would be running off anymore. I was having some trouble getting past Holly constantly walking out when things got a little rough or confusing in previous books. You married a man after a one-night stand. There’s going to be a pretty significant learning curve here, and you have to be mature enough and willing to put in the work, or why did you bother getting married in the first place?

Fortunately, Holly seems to get her shit together and realize this as well, and they spent the rest of the book learning to trust each other and learning to trust this relationship. It’s no wonder they’re both having trouble after their one-night stand turned into a marriage in less than 72 hours. They don’t know each other at all, and if they want a chance to get to know each other, they have to be willing to put in the work and not run away every time something happens they don’t like. And Creighton needed to figure out that you can’t just walk into a room, declare a woman yours and expect everything to fall into place exactly as you want it. He seemed to figure this out more quickly than Holly figured out her issues, but it was still grating at times.

Their decision to trust each other and work through their issues together is put to the test pretty quickly when two damning reports hit the media at the same time. I didn’t know how they would handle it, Holly, with her history of running, and Creighton with his history of demanding things go the way he wants. This was definitely a sweeter entry in this story than the other two, which doesn’t mean there weren’t plenty of sexy times. It was a little cheesier, a little more silly, but that’s ok. There was a twist at the end that sort of came out of nowhere and didn’t really fit the rest of the story, but it didn’t ruin anything for me.

I mentioned in my review of the second book that I like these two both individually and together, and that hasn’t changed. I think they complement each other very well and also balance each other. They were both stuck in their lives and their roles before they met and I think they have a lot to teach each other, they just had some growing up to do.

Overall, I really liked this trilogy. I hadn’t read anything by Meghan March before, but I’ll keep an eye out for her stuff from now on. She introduced some secondary characters that I really hope we get stories for, and if we do, I hope we at least get a check-in with Holly and Creighton. They ended the book in a good place, but I don’t think that means it’s smooth sailing for these two quite yet.