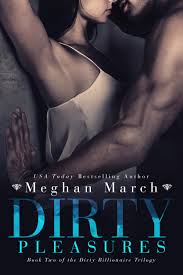 I did it. I married a billionaire.
My reasons are my own, but the last thing I expected was to feel owned.
I may have taken vows, but I’m still determined to be me.
Now his rules are taking over my world, but I’m not the kind of girl to just obey.
There’s only one problem: I might actually be falling for him…
I have no idea how this marriage is going to go, but holding onto a piece of myself while succumbing to his dirty pleasures is shaping up to be the ride of a lifetime.
Dirty Pleasures is the second book in The Dirty Billionaire Trilogy. Dirty Together, the conclusion of this filthy trilogy, will release on 1/12/2016.


Dirty Pleasures picked up exactly where Dirty Billionaire left off. Holly has just taken off and left Creighton after he forgot about a promise he made to her. And as we discover when we get into Creighton’s head, he did indeed just forget about Holly. I was glad to see Holly take a stand and leave, frankly. He didn’t forget a dinner date. It was hugely important that he be where he was supposed to be, and Holly had made sure to tell him that. He just screwed up. To Creighton’s credit, he owned his fuckup. He took off immediately to track Holly down and did what he could to make sure she knew he was sorry.

I liked this entry in the trilogy a lot, but the reason I rated it a little lower than the first is that it didn’t feel like we made a lot of progress here. Creighton and Holly have each realized they’re in love with the other, but neither has said so out loud. Both of them assume they’re alone in their feelings, so they make silly decisions and say things they shouldn’t. And in fact, though this may be a minor spoiler, we end in the exact same place. Holly leaves Creighton again, even going so far as to leave him the exact same note she did at the end of the Dirty Billionaire. We got some minor character development from both Holly and Creighton, and we learned a lot more about their back stories, but the story itself didn’t really move forward very much.

That said, I’m really looking forward to reading the final book in the trilogy. Holly and Creighton not only come from very different backgrounds, but they also have very different views on the world and their places in it, and different ideas about how their relationship will progress and the place they’ll each hold in it. I really like these two, both individually and together, and I’m really excited to see how they manage to work this out.

I have reviewed 12 books so far this year.