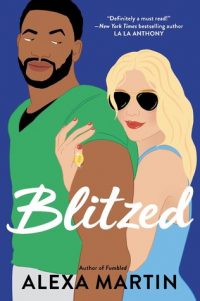 Maxwell has finally met an opponent that he can't best in this new football romance from the author of Fumbled.

According to Brynn Larson, Maxwell Lewis is more trouble than he's worth. She doesn't care if he's a football god with a rock-hard body that brings most women to their knees. After an encounter that ends poorly, she's not interested in giving him a second chance. The last thing Brynn expects is for him to turn up at her bar months later, hat in hand. It doesn't matter if he brings more customers to her business--she's still not going on a date with him.

Maxwell knows he made a mistake. He'd been waiting to make his move on Brynn since the day he laid eyes on her and he was finally ready to go for it until he screwed up. He wishes he could tell her the truth about what happened that night, but he just can't. He can't tell anyone, so he'll make amends and hope she'll forgive him.

Brynn's not like other women, though. Playing for the Mustangs doesn't impress her and gifts make her scoff. Max will have to bring his A game if he hopes to win her over.

Alexa Martin gets better with every book she publishes. Blitzed is the third book in her Playbook series, but you can read it as a standalone if you haven’t read the first two.

This story involves Brynn, who we’ve come to know through Intercepted and Fumbled. Brynn owns HERS, the bar where the Lady Mustangs have taken to holding their meetings, and of this book, several of their larger events. Maxwell Lewis is the Mustangs’ defensive back (which I’m sure means something to someone who cares about football a lot more than I do) and every time he comes into her bar, the tension between them is palpable. There’s an incident at the end of Fumbled that’s revisited here, and which causes Brynn to decide that maybe Maxwell isn’t the guy she thought he was. It takes her a long time to trust him again, and I can’t say that I blamed her.

I really liked watching Brynn and Maxwell find their way to each other. Brynn is a tough nut to crack, but Maxwell, who’s usually very quiet and likes to be in the background, not in the center of attention balanced her out nicely. The relationship evolves pretty slowly over the course of the book, but that’s ok. It’s nice to see a slow burn that’s also pretty hot.

I couldn’t go with a full five stars, though. The incident from the end of Fumbled that comes back up in the beginning of this one is one reason. It’s a pretty violent outburst from Maxwell that ends with part of Brynn’s bar and inventory destroyed. Yes, he apologizes, yes he pays for the damage, but it’s never really dealt with. We do eventually find out what the problem was, but it still doesn’t’ make a lot of sense. It’s an ongoing family situation that he’s dealing with, but why this time? What was it about this specific phone call that he got that made him get violent when he’s never shown to be violent before or after, even though he deals with that same issue for the entire book? It’s just sort of…. dropped.

The other issue I had with the book involves that family situation I mentioned. I don’t want to give away too many specifics, but Maxwell’s brother, Theo shows up. Maxwell is very insistent from the beginning that Brynn not be anywhere near Theo. “I mean it. Do not talk to him. Do not engage. If you see him, call me and get away from him.” Those are not the words of a guy who just doesn’t want his crush near his hot brother or something. If a man, hell, if anyone, tells you something like that about someone else, you listen. You don’t engage. You don’t talk to that person.

And Brynn agrees with all of this. So why, when Theo shows up at her bar and starts telling her a whole lot of really damaging shit about Maxwell, does Brynn instantly believe him? To the point that she won’t even listen to Maxwell when he tries to talk to her about the situation? It’s the most ludicrous setup for a relationship breakdown. It makes no sense, whatsoever, that Brynn would believe anything Theo says. He has no evidence, he has no way to prove anything, just “Maxwell did this terrible thing” and Brynn breaks up with Maxwell. I hated it when I read it, and I hated it again when I re-read it before writing this review. “Either I believe the man I love, or I believe a woman who had no reason to lie. I want to do both, but I don’t know how.” There’s a 3rd option! Recognize that you’re being lied to by a man who you were explicitly told couldn’t be trusted. It makes no sense and I’m getting upset about it again. “Our first hurdle and I ran in the other direction.” This was not a hurdle! This was a full-on betrayal. And her apology to Maxwell wasn’t nearly big enough. Not nearly. Ugh – I’m talking myself into fewer stars just be thinking about it again.

Anyway. The writing itself was excellent, as always, and this group of friends is always fun to revisit. But, wow, that whole last few chapters almost ruined it for me. I’m sticking with 4 stars, though. I loved the entire book up until that part, and probably would have gone with 5. So 4 seems fair.

This site uses Akismet to reduce spam. Learn how your comment data is processed.