“This book was just delicious – friends to lovers, roommate, and a player brought to his knees. I could not get enough of these characters! I love a steamy romance with heart & soul.” — J.H. Croix, USA Today bestselling author

Better Than Me, an all-new steamy friends to lovers romance from USA Today bestselling author Kimberly Kincaid, is available now! 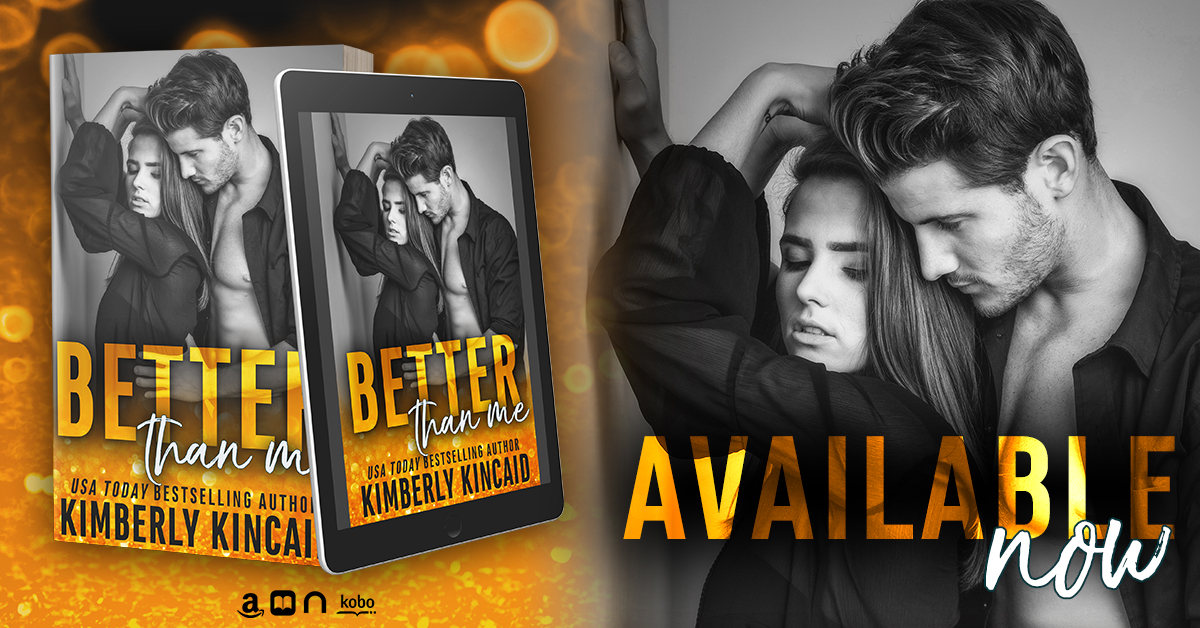 is about to fall for the one woman

Did I mention that she’s

A) his best friend

B) immune to his panty-melting charm, and

C) sleeping on his couch for the next six weeks?

But Jonah’s not made for commitment,

and a good man is the one thing Natalie deserves.

Not someone who can only offer up

Unless that’s what she wants.

Because Jonah wants her. And with each

moment they spend working together—

the harder it is to resist temptation.

And even harder to resist the fall that

A steamy medical contemporary romance from USA Today best-selling author Kimberly Kincaid. Watch this cocky hero fall head over scalpel for his sweet and sexy BFF. Full-length standalone story with action in the emergency room and the bedroom, and a sweet-and-sexy happily ever after.

Natalie and Jonah snuck up on me. I thought I had them pegged from the very beginning, and I wasn’t completely wrong, but there were enough surprises to keep me interested and invested in their story. We’ve seen this a million times – the unrepentant manwhore and the virgin – and I was initially torn on whether to even keep reading. Honestly, I’ve been inundated with virgins recently, and I don’t know where they’re all coming from. But I kept going, and I’m so glad I did.

Natalie and Jonah were BFFs who end up as roommates while Natalie’s apartment is undergoing some repairs. But it’s ok, because they are absolutely, 100%, in no way, attracted to each other, so it’ll be fine. Their relationship will stay exactly as it is. There will definitely be no shenanigans, and no one will develop feelings beyond the already-settled friend love.

Natalie is a pediatric surgeon, and Jonah is a trauma surgeon, so there’s a lot of heavy shit they have to deal with in their day-to-day lives. They both balance it out nicely with a lot of off-work goofing around, and their friendship is solid. And they communicate with each other, which is something else I wish I saw more of. None of the issues they had to deal with were due to miscommunication or flat out avoiding talking about anything.

If I had to nitpick anything, I’d say that Jonah’s constant, and I mean constant, musings about how he’s not the guy for a long-term relationship began to grate. It was so much. He barely completes a thought without tacking it on there somewhere. “Jonah thought he wanted pizza for dinner, but leftovers were too much of a commitment, and he’s not a long-haul guy.” (No, that’s not an actual line from the book) At one point, he and Natalie have a discussion/argument where he lays out his completely honest and authentic opinion that the last movie he saw, in which the main character fought an entire fleet of aliens alone and beat them, was more realistic than When Harry Met Sally, because that’s not how relationships work. It’s… a lot. He prefers one-night stands. We get it. It doesn’t need to be in every single thought and conversation he has.

But that’s really my only quibble with Better Than Me. I really enjoyed seeing Natalie and Jonah navigate their way through this new facet of their relationship and figure out how to be with each other. The breakup didn’t go as I expected, either, and was even more heartbreaking than I had expected it to be. How everything went down showed me just how far each of these characters had grown as a result of being with each other. The epilogue sets up the next book nicely, and I’ve already preordered it because I really want to see the rest of the crew at Remington Medical get their HEAs.

“Come on, Jonah. You and I are just friends, and my living with you would only be temporary. I’m neat and fairly low-maintenance, and I really can cook like a boss. I know you like your space.” It was a euphemism, and if the smile poking at the corners of her lips was anything to go by, Natalie knew it as well as Jonah did. He was a freaking island, and it wasn’t by accident. “So I can totally stay out of your hair if you want me to. But please.” In a blink, her smile disappeared. “I’m begging you. Don’t make me stay with my parents.”

Jonah’s nice-guy propensity came out of hiding to pick a fight with his defenses, both of them quickening his pulse. His defenses didn’t fight fair, though, reminding him that he had damn good reasons for not being a long-haul guy.

He opened his mouth to say he was sorry. To tell Natalie, rationally and with good reason, why he just couldn’t let her move in with him for six weeks.

But what came out was, “Okay. You can stay.”

Christ, his inner nice-guy was a sneaky son of a bitch.

“Really?” Natalie let out a gasp that quickly slid into an adorable ear-to-ear grin, and okay, Jonah was going to have to do some damage control here.

“With a couple of stipulations,” he said, holding up his fingers to count them off. “If you want to watch rom coms or that channel that plays all those gooey holiday movies, you’ve got to do it on your iPad.”

Jonah knew from experience that she loved both, and with Christmas only a month away, she’d certainly want to mainline them whenever she had down time. But while happily ever after might be on some people’s agendas—and more power to them as long as they didn’t try to convert him to coupledom—he sure as hell wasn’t going to let it parade across his big screen TV.

“Come on! Not even It’s a Wonderful Life?” she asked, but he stood firm.

“The only Christmas movie that flies in my apartment is Diehard.”

Her hands moved to her hips. “That is so not a Christmas movie.”

“Take it or leave it, Kendrick. Yippie-ki-yay is all the holiday cheer you’re going to get out of me.”

Natalie frowned, but didn’t push her luck, so Jonah continued. “I’ll take that you cook, I clean bargain. I don’t mind doing all the dishes, and I wasn’t kidding when I said I can’t cook. No complaining about football or hockey—the Rogues are kicking ass again this year on the ice and I want to watch every game that I can. And for the love of all that it sacred and good, no bras on the shower curtain rod.”

His surprise must have stumbled over his face, because she laughed and tacked on, “What? You know I love hockey, too, and after meeting Finn Donnelly over the summer at that fundraiser at The Crooked Angel? I’m all-in for the Rogues. I promised you I’d cook, and the other stuff”—she lifted one shoulder beneath her light pink sweater—“I can stipulate, even if it is kind of grinchy. So, do we have a deal? I can come live with you until this mess is all fixed?”

Jonah exhaled. “Yes, we have a deal.”

Kimberly Kincaid writes contemporary romance that splits the difference between sexy and sweet and hot and edgy romantic suspense. When she’s not sitting cross-legged in an ancient desk chair known as “The Pleather Bomber”, she can be found practicing obscene amounts of yoga, whipping up anything from enchiladas to éclairs in her kitchen, or curled up with her nose in a book. Kimberly is a USA Today best-selling author and a 2016 and 2015 RWA RITA® finalist and 2014 Bookseller’s Best nominee who lives (and writes!) by the mantra that food is love. Kimberly resides in Virginia with her wildly patient husband and their three daughters.